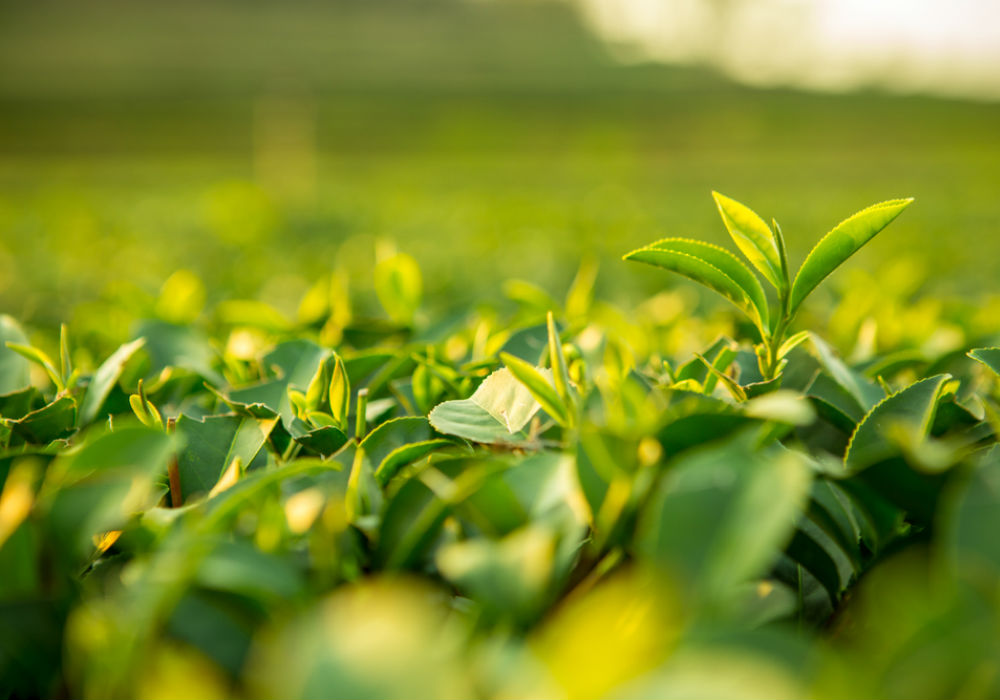 India holds the record for the second-largest agricultural land in the world, with around 60% rural Indian households making their living from agriculture thus creating a huge scope for agritech startups in the country.

The central and state governments are proactively pursuing policies to improve farmers’ lives in India. In fact, PM Modi’s government has an aim to double the average farmer’s income by 2022. But is enough being done to remove inefficiencies in the agricultural supply chain to make Indian agritech a lucrative investment opportunity?

We, at Inc42, have taken up the onus to promote and spread awareness about agritech in India. To this end, our first step was hosting an AgriTech Investors Roundtable on 25 May 2017 in Delhi. The purpose of the roundtable was to discuss the challenges and opportunity in the Agriculture sector in India and also to launch a report on – The State Of Indian AgriTech – 2017. 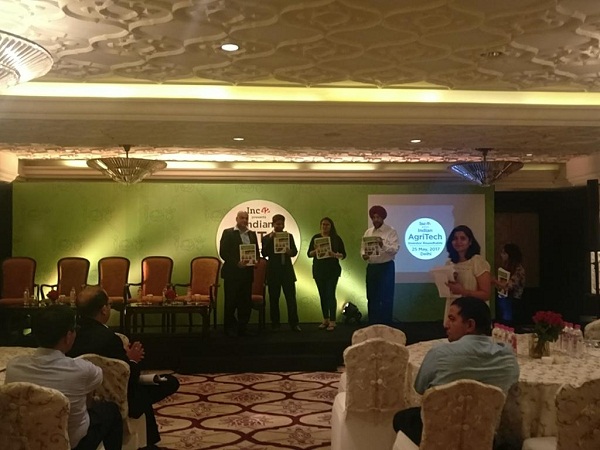 The State Of Agriculture In India

Agriculture, along with fisheries and forestry, is one of the largest contributors to the Indian Gross Domestic Product (GDP). The GDP of agriculture and allied sectors in India was recorded at $244.74 Bn in FY ‘16.

A drop in landholdings (average 1.4 hectares), small and fragmented land holdings, a decreasing agricultural land versus a growing population, decreasing groundwater levels, poor quality of seeds, lack of mechanisation, low yield per unit crop and a dependence on middlemen are some of the challenges for the growth of agriculture in India.

Added to that, an absence of an organised marketing structure for produce, malpractices in the existing unorganised agricultural markets, inadequate facilities for transportation and storage, scarcity of credit, and limited access to superior technology to get timely information are some of the many afflictions which obstruct the Indian agricultural sector.

Opportunities lie in areas like how to increase crop production, improving the nutritional value of the crops, reduction in input prices for farmers, improving the overall process-driven supply chain, reducing wastage in the distribution system, making easy farm mechanisation available, and enabling connectivity of farmers with the masses by interlinking the consumer and producer.

AgriTech startups are also leveraging technology in the area of market linkages such as retail, B2C and B2B marketplaces and digital agronomy platforms. AgriTech startups are now able to address input challenges of agriculture in India from the very beginning. They are able to provide correct information, techniques, and efficiencies to farmers both for pre-harvest applications and post-harvest use cases.

According to the latest report, for 2016, over $3.23 Bn was invested in agriculture sector worldwide. Of this, 53 Indian agritech startups raised $313 Mn. Globally, category-wise, 40% of the total funding ($1.29 Bn) was invested in food marketplaces or the food ecommerce category, followed by biotechnology startups which garnered 22% of the funding ($719 Mn). Investment in precision agriculture technologies, which include data-capturing devices and farm management software, came third at $405 Mn, while investment in Novel Farming Systems, which are startups using new and innovative ways to produce agricultural and biological products, was the fourth category wherein funding flowed ($247 Mn).

Demand-side drivers such as population growth, rising income levels leading to increasing consumption, and increasing exports favour the growth of agriculture in India. More so, policy support from the government such as increasing MSPs, increasing crop insurance support, the introduction of various schemes to facilitate farmers, initiatives to bolster easy credit to farmers will also increase growth. The need of the hour is for all stakeholders – from governments to agritech startups to investors – to come together in harnessing the opportunity to transform this sector. Mostly, government policies treat agriculture as a poverty alleviation method but the focus should be on enhancing productivity and raising incomes. The impetus should be on the application of technology to lower challenges on the input side right from planting to irritating to harvesting and finally selling.

The report launch was followed by two-panel discussions centred on the theme that the agriculture value chain requires disruption and innovation to tackle inefficiencies – which would most likely come from tech-driven startups rather than the traditional agriculture players in India.

The first panel comprising Vikram Gupta, Ravinder Singh Saini, Adhir Jha, and Akash Rukhaiyar was moderated by Shamit Ghosh. The panel examined if the agritech opportunity is a hidden opportunity or mere hype.

AgriTech – A Hidden Opportunity Or Hype?

On this, Vikram Gupta stated that the size of the opportunity is quite large. He said, “From an investor’s perspective, investors are looking for four-five years’ kind of timeframe for returns. We are looking for asset-light opportunities, where you can use technology to scale up businesses. One of them is information technology – which farmers can leverage to take mission-critical decisions.”

Vikram noted that while it’s challenging to monetise these products, there are interesting models which are being monetised, and farmers are willing to pay for them. However, he pointed out that when it comes to the other part of technology such as farm mechanisation, India is lagging. 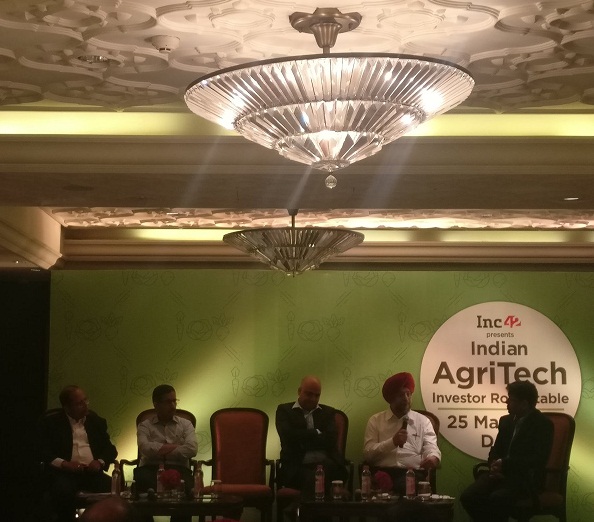 He said, “Despite India having one of the highest productive agricultural land in the world, its share of sales in the mechanised products sold by top Fortune 100 farm companies in the world is less than 5%.” This is where he believed an opportunity exists for startups.

Taking the discussion further on the same tangent, Adhir Jha stated that since average landholding size of farmers is small, many mechanisation technologies are beyond the means of farmers. He said, “Hence, startups need to come up with technologies which can be leased to farmers for a period of time to but whose maintenance rests majorly with startups.”

He also added that since it takes time for farmers to develop confidence in agritech extension activities, patience will have to be a key factor here. “So, as an investor, you have to be in here for the long haul. You might see a negative impact in the first four or five years and then the model might turn around.”

The second-panel discussion centred on exploring the investors’ perspective in detail –why investors who have invested in the sector continue to bet on it, what would make investors who don’t invest in agritech currently explore it proactively, and trends to watch out for in this space.

On being questioned as to what made Ankur Capital invest in agriculture, Ritu replied the fact that the section is associated with the fundamental act of eating, coupled with the drive to engage with the backend of delivery of food, as demands and habits change was the main driver for investment. 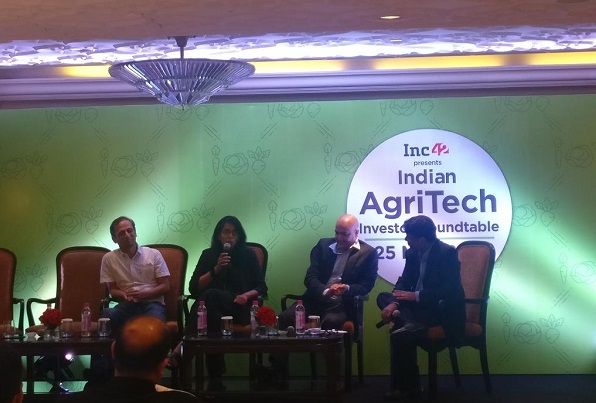 Speaking on if the opportunity is viable, Hemendra Mathur stated, “The size of the opportunity is a key factor as well as the demand. If you look at the last 10 years, why VC investment has picked up is because some bit of inflection point was there when per capita income of Indians increased. This resulted in shifts in demand habits in food in India in 2013.  And that is reflected in the balance sheet of the food sectors. It’s not that we are eating more, but more consumers are willing to buy good quality food. So, that’s a reason for sudden VC interest in the last few years in agriculture.”

He also added that another reason is that it is a very defensible sector, given that food is the last thing one cuts out even when the economy goes down.

The investors also discussed that technology will help lower costs for farmers. Thus, what startups have to do is build the cost value proposition for the farmer. Hemendra aptly stated, “And viability cannot come alone from the farmer but from the entire ecosystem on the supply chain, who can make business models viable.”

For encouraging more funds to flow into the sector, Vikram believed that the government should get incentives to funds who invest in agriculture, its sub-sectors, and in remote areas. He stated that general education and awareness at the grassroots level is missing and the government has to play a huge role in informing farmers about the opportunities available – be it credit or technologies.

For startups looking to enter the sector, Hemendra added that the top three opportunities lay in capturing real-time data, image analytics, and technology for soil scanning. He explained, “With satellite imagery, you can tell at sowing stage, what is going to be the potential yield. So, once it reaches a point where demand supply is matching, the government can issue an advisory. These measures would help farmers to avoid excess sowing, manage supply so that prices don’t crash.”

Vikram aptly summed up the discussion stating, “The Uberisation of Indian agritech startups is just waiting to happen. The inflection point is around the corner.”

The session concluded with a presentation from Jukka Peuranpää, CEO, Agroy and a former farmer. Agroy has made giant strides in terms of making its presence felt in the US and now with aims to plant its flag in India.