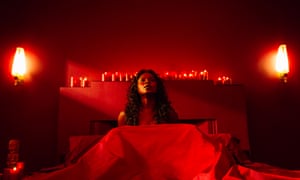 It’s a good bet that writers are scrambling to produce the first great novel of the Age of Trump: trying to make sense of this monstrous unexpectedness, this terrifying combination of clowntime and apocalypse. But maybe the great novel of Trump’s America has already been written. It came out 16 years ago and its name is American Gods, which makes the new TV adaptation, co-helmed by Bryan Fuller, extremely timely.

It’s not, I should add, that Neil Gaiman makes any specific prophecy in his novel. American Gods is not actually about Trump. It has no interest in US electoral politics (although it is profoundly interested in power); it has nothing to say about TV reality stars, but it is insightful about TV itself.

Shadow Moon, the book’s improbably named hero, is released from jail to attend his wife’s funeral. He runs into, and ends up working for, the enigmatic Mr Wednesday: one of the novel’s titular gods, whose identity will not, if you know the etymology of that particular day of the week, come as a surprise.

We learn that mortal America coexists with whole populations of deities, some brought over by settlers from the old world – Odin, Thor, Loki, Anansi and so on – and some newly minted out of the particularities of modern life: television, the internet, the stock market, the shadowy power of what nowadays we would call “the deep state”: gods with names such as Media, The Technical Boy and The Intangibles. People believe in these things, and that makes them powerful. “People believe,” Shadow realises. “It’s what people do. They believe. And then they will not take responsibility for their beliefs.”

One of Gaiman’s nicer ironies is the way the main thing we associate with gods – immortality – is at odds with how temporary specific religions have proved in human history. You don’t worship Zeus, after all, and you’ve never even heard of Tarhunz – though in their day they commanded human devotion on a vast scale. “One day every soldier in the empire has to shower in the blood of your sacrificial bull,” Gaiman’s Jacquel, his version of Anubis, notes sardonically: “The next day they don’t even remember your birthday.” If gods are artefacts of human belief, that leaves them at the mercy of human caprice. And we humans are very capricious.

What has all this to do with Trump? Well, American Gods is much more about America than it is about gods. “This is the only country in the world,” Wednesday tells Shadow, “that worries about what it is. The rest of them know what they are. No one ever needs to go searching for the heart of Norway, or looks for the soul of Mozambique. They know what they are.” And Gaiman’s anatomy of America puts this un-anchored itinerant search for belief at its heart.

In the 2016 election Americans had the choice between one candidate who was rational, experienced and competent and another who was, let’s say, none of those things. We know which they chose. Gaiman’s novel can help us understand why.

Trump is no Odin. He’s not even Gaiman’s deviously clever and far-seeing Mr Wednesday. But Trump is a manifestation of something important: something not rational, a gut-level idiosyncrasy close to caprice. Trump’s genius was understanding that people no more choose leaders for rational reasons than they choose to worship gods for rational reasons. Or to be more precise: in 2016 those Americans who made a rational choice were outflanked by those Americans who acted atavistically, who felt, consciously or otherwise, that irrational times must be presided over by irrational authority. Believe me, I’m not trying to defend either Trump or his supporters; but we might at least entertain the notion that neoliberalism, populism, racism and capitalism are all, as systems, at least as bonkers as is their currently presiding deity.

Trump is not much of a god. He is petty and inconstant, angry and vindictive, sensual and venal. But plenty of gods have been all those things, and that hasn’t stopped them being worshipped by swaths of humanity for thousands of years. Then again, Trump is not interested in ruling well, or rescuing the economy, or curating American prestige abroad. He is interested fundamentally in one thing only: in being worshipped. Gaiman’s novel says: but of course. That’s how gods are.

But Gaiman also understands something that perhaps Trump doesn’t: that being ignored is much worse, for a god, than being hated. The Cult of Trump will always have its acolytes, but it’s a relatively small congregation. Most of Trump’s congregation will shift their devotion to other things soon enough. Gaiman’s book understands this because it understands that the force that made Trump – TV – is a deity vastly more powerful than any subsidiary figure. People will still be worshipping Gaiman’s Media long after Trump is a historical curio.