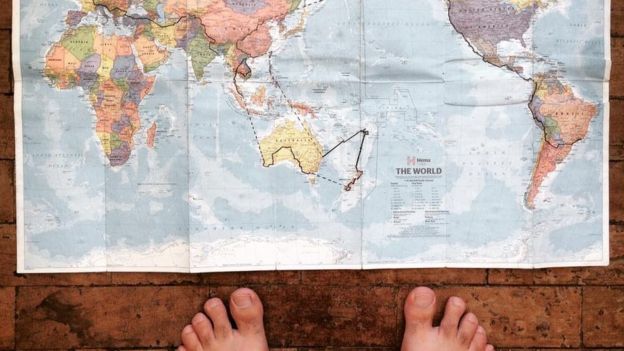 Leigh Timmis has been cycling around the world since 2010 – and on Saturday he’s coming home.

His seven years in the saddle have seen him confront a mountain lion and sing to a bear, all on a globetrotting budget of £5 ($6.40) a day.

“The whole world has been my garden,” he says wistfully.

“I never thought about what happens on the 23rd (of April). What do you do after this?”

It was seven years ago when, depressed with a life lacking direction, Leigh said he would circle the globe on a bike.

With youth on his side and savings in the bank, he thought he could achieve his dream in two years, while raising money for the Derbyshire Children’s Holiday Centre.

“I guess a lot of men want to go on this sort of ego trip – show the world how great I am.

“I thought it would just be about me and this freedom.”

But the naive visions he had of conquering the world changed soon after he left. 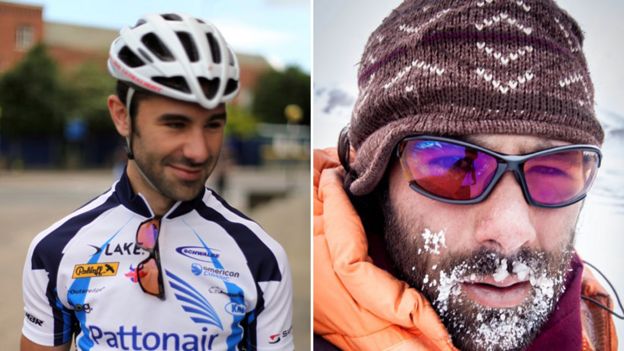 “So I began meeting people – sharing evenings with them and meeting their families.”

The journey was no longer about racing from one country to the next, but experiencing them one by one.

The slow and vulnerable bicycle was the perfect vehicle “to connect to people”.

When he ran out of money, he didn’t go home, but found work and kept cycling.

On the road, Leigh normally slept in a tent, rarely paying for transport or accommodation.

Throughout his journey, he lived off an average of £5 a day.

He says this simple living and the kindness of strangers saw his values change.

It’s only recently Leigh has had a mobile phone – a deliberate decision to enable him to travel free from technology.

Besides, he says, when he left the UK not everyone had smartphones.

Packing for six continents: What’s in the panniers?

Despite his nomadic existence, one thing has remained a constant for Leigh.

Dolly is the same bike he has had for the entire trip – handmade for him in Derby. She’s heavy, but was built to last and still has the same frame and wheels as day one.

Leigh recalls a Tom Hanks Castaway moment, when in Peru, he found himself getting particularly emotional and talking to the bike he had been through so much with.

“All my things in the world are on that bike.”

“People see it’s my whole life and they have respect for this. There is an element of trust in the world.”

Wildlife wasn’t always so friendly, and Leigh admits naivety got him through on more than one occasion.

In Canada he came skidding face to face with a bear.

He recalled that just weeks before a friend’s daughter had been reading a book about bears, including a poem to recite should you ever encounter them.

“The only thing that came to my head was this stupid song.” And so he found himself singing the words to which he is now indebted.

Another “lesson in the necessities of life” came in the Australian outback when, while cycling in the 40C heat, his water supply slipped off the bike and he had to run back to search for it.

“At that moment you realise how precious just one litre of water is.

“That was a big lesson.”

Many miles later, after a couple of weeks working in Australia and Taiwan, travelling through China and the Americas, Leigh started running out of money again which led him to consider the journey home.

A meticulous diary keeper, he has written entries about almost every day of his travels.

When a diary was finished, he sent it back to his mum, who would get a glimpse into her son’s life.

14 December 2012, in the Australian outback desert

The nosebleeds dry and the smell of rotten camel fades and I continue to sip saline and push Dolly for the last few days of the desert as Kata Tjuta begins to loom on the horizon like a crowd of balding heads.

Despite limited contact with his family, he says his relationships with his parents and sister are now closer than ever and the thought of them (and a reliable water source) have pulled him back to the UK.

Adapting to a “normal” life will be difficult, he admits, but: “I realise how lucky I am. A lot of people won’t get this opportunity.”

So what is he most looking forward to about being back on British soil?

“The smell of going past a fish and chip shop and to be able to listen to people in the supermarket and understanding every word,” he says.

“But the real emotion will be when I see my mum in the place I left her seven years ago. I get a lump in my throat just thinking about it.”

He’s now considering a job working with children – wanting to share his experience and “show people what is possible”.

“But there’ll definitely be some more adventure. If I can ride a bike around the world, I can do anything.”

A Around Bike in on Seven The World Years: 2017-04-22
Loknath Das
to in With for and of on India The Launched at Samsung Launch A iPhone Android Galaxy More Apple Rs New Be 7 Price Google