German carmaker BMW invested $8 billion in a 1.2-mn sq ft assembly plant in the US. (Photo: Reuters)
Years before Donald Trump began promising to bring back good manufacturing jobs by getting tough with US trade partners, such jobs have already been on the rise, largely thanks to foreign companies now cast as villains in Trump’s narrative.

Reuters analysis of federal jobs data shows that out of 656,000 new manufacturing jobs created between 2010 and 2014, two thirds can be attributed to foreign direct investment.

More recent jobs numbers are not yet available, but over $700 billion in foreign capital has poured in over the last two years bringing total foreign investment to $3.7 trillion at the end of 2016, a world record.
Now foreign companies that have spent billions of dollars on US factories and local leaders who host them worry that global supply networks that back those investments will fray if Trump makes good on his pledge to roll back trade liberalisation.

The US president has threatened to tear up North American Free Trade Agreement with Canada and Mexico and slap higher tariffs on nations that run trade surpluses with the United States, such as Germany or China. The administration is also discussing tighter immigration rules and more security screening of investment. 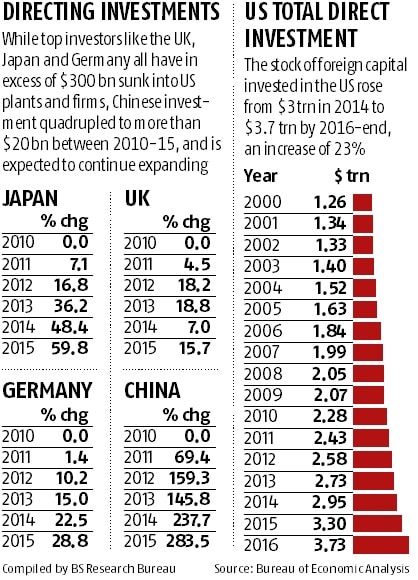 The southern states have voted for Trump, but have also spent decades wooing foreign companies with flexible labour laws, financial incentives and investment in ports, roads and other infrastructure.

German carmaker BMW has invested here $8 billion in a 1.2 million sq ft (11.15 hectares) assembly plant, which has become the largest single exporter of cars by value from the United States.

Mercedes-Benz, part of Daimler, is adding 1,300 jobs so it can make its Sprinter van here rather than merely assemble it with imported parts, which also means more business for local suppliers. Volvo Car Group, part of Chinese conglomerate Geely, is due to open its first North American plant next year with a target workforce of 2,000.
[“Source-business-standard”]
Bad drive Firms Foreign Job Revival US 2017-07-01
Loknath Das
to in With for and of on India The Launched at Samsung Launch A iPhone Android Galaxy More Apple Rs New Be 7 Price Google