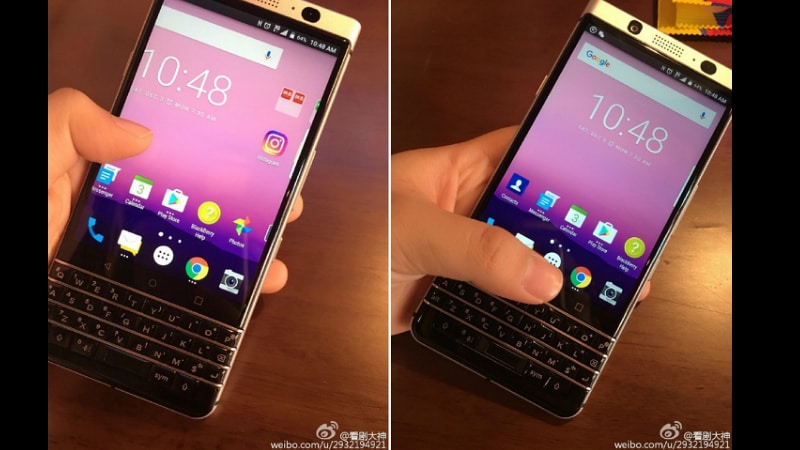 BlackBerry has been looking to revive its smartphone portfolio for a while now, but have been largely unsuccessful. BlackBerry CEO John Chen confirmed last month that the company is working on its last in-house smartphone with a QWERTY keyboard. This smartphone is largely expected to be codenamed Mercury, and now fresh live images leak has revealed key details of the device.

The images have been leaked on Weibo, and they show uncanny similarity to the previously launched BlackBerry Priv. However, the keyboard is fixed below the display, and does not slide out of sight. It also has capacitive navigation buttons, and not on screen buttons, as found on the Priv.

The alleged BlackBerry Mercury is tipped to have the fingerprint sensor integrated into the space bar. BlackBerry is expected to unveil the smartphone sometime this month, and begin shipping it in 2017. It is also expected to be powered by the Snapdragon 625 processor, and feature a 4.5-inch sized display.The smartphone has been spotted on Geekbench as well, and the leak hints at 3GB of RAM, 32GB of inbuilt storage, an 18-megapixel rear camera, and an 8-megapixel front camera for selfies.

BlackBerry will officially stop producing, stocking, and distributing its own phones, after this one last treat for all its (remaining) die-hard fans. Moving forward, it will license the BlackBerry brand to outside companies to put on phones they build themselves.

The physical keyboard is BlackBerry’s best-known smartphone feature, with many former users still lamenting its absence, and the company plans to switch off the lights in its factories, after giving its loyalists one last parting gift. There’s very little that is known about the BlackBerry Mercury as of now, but more details will surface as launch date nears.