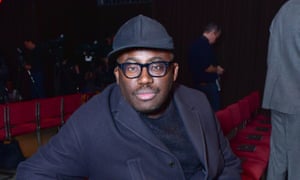 Edward Enninful’s career in fashion began when, as a 16-year-old taking the tube to school, he was stopped by the influential stylist Simon Foxton and asked if he’d thought about modelling.

Almost three decades later, the journey that began on the Hammersmith and City line has brought Enninful to the very pinnacle of the fashion world, after British Vogue announced he had been appointed its new editor-in-chief.

As “one of the most talented and accomplished fashion editors in the world”, Enninful was “supremely prepared” to take over from the outgoing editor, Alexandra Shulman, the magazine’s publisher, Condé Nast, said in a statement on Monday. The 45-year-old, a former contributing editor at US and Italian Vogue, has been creative and style director at W magazine, based in New York, since 2011.

Highly influential and well-liked in the industry, Enninful has proved a popular choice for the Vogue top job, with news of his appointment warmly welcomed by fashion insiders. It was not, however, widely expected.

Gossip has been feverish since Shulman announced she was stepping down in January after 25 years, with most observers expecting the magazine to hire one of its experienced, female, fashion or features staff or alumni.

Instead, Vogue has opted to appoint its first male editor in its 101-year history, and the first ever black editor of a mainstream British style magazine. Enninful is an outspoken advocate for diversity in fashion. His background, too, is in visual styling rather than the fashion features apprenticeship more commonly served by editors. Vanessa Friedman, the New York Times fashion director and chief fashion critic, tweeted: “Congratulations to @Edward_Enninful new editor of British Vogue! This is going to shake things up.”

Enninful was born in Ghana, the son of an army officer and a seamstress who moved to west London with their six children when Edward was a toddler. His religious parents, he has said, were initially resistant to his modelling career, but the shy teenager found he had a prodigious talent; by 18, he had been made style director for i-D magazine, befriending Naomi Campbell and Kate Moss when they were all still teenagers (“TODAY HISTORY WAS MADE,” Campbell, still a close friend, wrote on Instagram on Monday.

He became a contributing editor at Italian Vogue, working closely on its black models only edition in 2008, and later American Vogue, while working as a freelance stylist.

That wasn’t just because he is black and male, said Amed – though the new editor would certainly bring a fresh perspective – but because “he is more of an images guy than a words guy”.

“One thing that hasn’t changed in this digital revolution is the power of the fashion image – in fact, one could argue that image has become even more important, and he is a very, very talented image-maker.” In Enninful’s Vogue, “what we can expect to see is some very powerful fashion imagery”.

That kind of savvy with images and social media – not insignificantly, the editor has almost half a million Instagram followers – makes a lot of business sense in the current publishing climate. It was notable that in hailing his appointment, Condé Nast’s chair, Jonathan Newhouse, mentioned Enninful’s social media following and called him “an influential figure in the communities of fashion, Hollywood and music which shape the cultural zeitgeist”.

Caroline Rush, chief executive of the British Fashion Council, similarly praised the new editor as “forward-thinking, innovative, commercially astute and a true revolutionary when it comes to his ideas on what fashion should be”.

Late last year, Enninful collected an OBE for services to diversity in fashion. The recognition of his work on diversity was particularly valued, he has said, because it wasn’t just about him. He has been an enthusiastic champion of non-white models, but insisted it must go beyond tokenism: “We need more diversity, from schools to internships to mentorships. That’s what I try to do.

“It’s very easy to say, ‘Oh, there’s one black model in a show and one black or Asian model in an advertising photograph, so we’ve filled the quota.’ No, it should be a continuous conversation. It shouldn’t even be an issue as far as I’m concerned. Beauty’s beauty.”

He is also unafraid to be more explicitly political. In February, in response to Donald Trump’s proposed Muslim travel ban, Enninful gathered 81 leading figures from the fashion community to make a simple but powerful video in which they declared: “I am an immigrant.”.

Should we expect Enninful’s Vogue to be more political too? “All you need to do is look at the political climate we are operating in, where politics and fashion – politics and everything – are intersecting more and more,” says Amed. “I imagine we may see more political imagery, which I don’t think is a bad thing at all.”

[Source:- Gurdian]
Appoints as British Editor Edward Enninful New Vogue 2017-04-10
Loknath Das
to in With for and of on India The Launched at Samsung Launch A iPhone Android Galaxy More Apple Rs New Be 7 Price Google