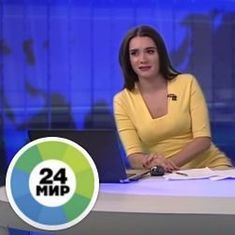 Russian television anchor Ilona Linarte was caught off guard during a live broadcast on channel Mir24 recently, when her show was interrupted by an unexpected guest.

A friendly black dog had gatecrashed the newscast, startling Linarte as she heard him barking in the middle of a grim news report.

When she looked around for the source of the disturbance and spotted her canine guest, she said in Russian, “I’ve got a dog here. What is this dog doing in the studio?”

He was clearly in the mood for some fun, climbing onto her desk. Linarte gave in and petted the pooch.

“I actually prefer cats,’’ she told her audience. “I’m a cat lady.”

If you’re wondering how the dog ended up in the studio, a follow-up report from the channel cleared it up. The dog was actually with another guest on a different show but he somehow managed to break free and check gatecrash another live news broadcast instead.

We welcome your comments at [email protected]

[“Source-ndtv”]
A cuddly Dog Doing in is News pet studio? television This What 2017-05-27
Loknath Das
to in With for and of on India The Launched at Samsung Launch A iPhone Android Galaxy More Apple Rs New Be 7 Price Google