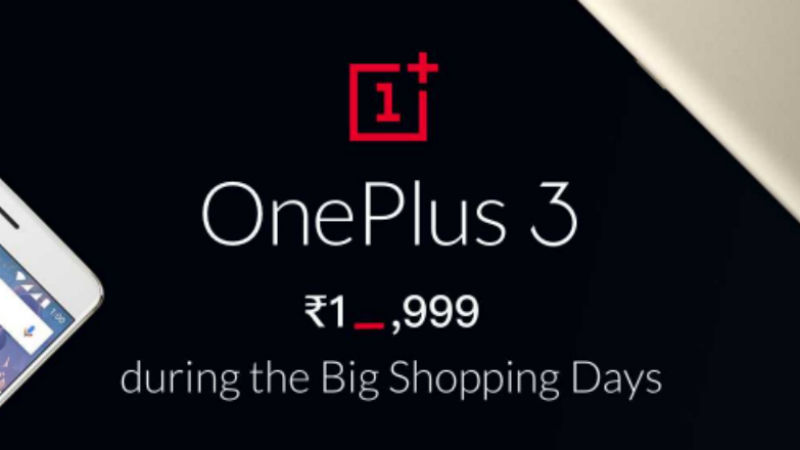 Those who happened to be visiting Flipkart’s website on Friday were greeted by an unfamiliar sight – a banner listing the sale of OnePlus 3 smartphones for under Rs. 20,000. Now, Flipkart has explicitly detailed that the OnePlus 3 will be available for as low as Rs. 18,999, which is Rs. 9,000 cheaper than the current price of the phone on Amazon India, the exclusive retail partner for the smartphone. The sale will start at 4pm on December 18. However, before you get excited about this price drop, you should be aware of all the facts.

As many would know, OnePlus has an exclusive tie up with Amazon, not Flipkart, to sell its products in India. So it does come as a surprise that Flipkart would list the OnePlus 3. In fact, the banner managed to surprise OnePlus Co-Founder and CEO Carl Pei himself, who took to Twitter to express his doubts about the whole matter to Flipkart Co-Founder Sachin Bansal, saying “What’s this? We’re exclusive with Amazon.”

Since Pei’s tweet, neither Flipkart nor Bansal have provided a clear reply. When asked for a comment, Flipkart told Gadgets 360 that “Flipkart is a marketplace which helps sellers connect with customers across the country. All our sellers are mandated to adhere to stringent guidelines. The prices and discounts for all our sales are decided by the participating sellers and brands.”Flipkart’s rather vague statement did not clarify whether the OnePlus 3 smartphones being sold on its site are genuine or not. From the looks of it, the limited number of OnePlus 3 smartphones will be sold on Flipkart from third-party sellers, but without an official warranty, though it’s hard to be certain.

OnePlus has cautioned interested buyers against the sale saying, “We have an exclusive partnership with Amazon in India. We advice customers to purchase OnePlus products only through official channels as we cannot guarantee the authenticity of the products sold elsewhere.”

The OnePlus 3 was launched in June and we found very little fault with the flagship. However, the OnePlus 3 had a very short lived stint in the limelight, having to make way for the OnePlus 3T just a few months later. In our review, we found that the OnePlus 3T has managed to improved on what was already a very good phone.

For those who were waiting eagerly for a OnePlus 3 price drop, the discount on Flipkart cannot get any better. However, you should make sure you’re buying the real deal along with warranty. Flipkart’s upcoming Big Shopping Days sale kicks off from Sunday.