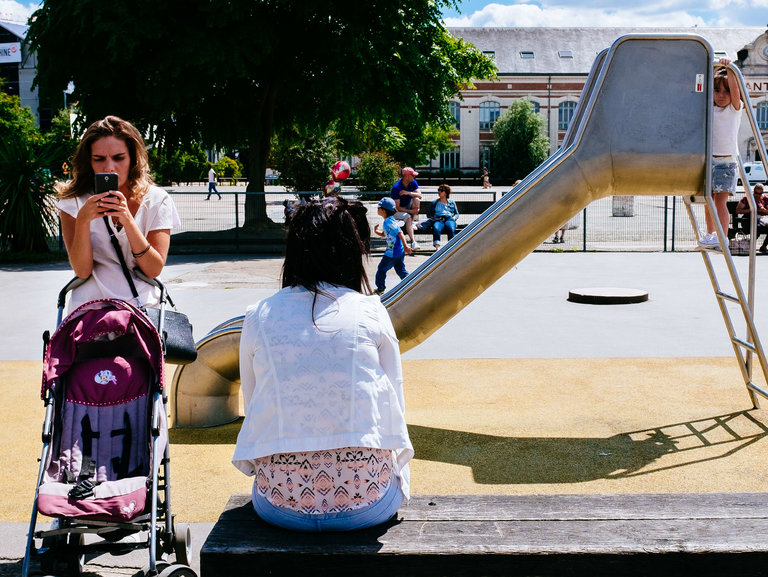 Your phone can seem to call to you in an especially seductive way when you are a parent on playground duty. And one reason is, let’s face it, that playground duty can get old long before your children do.

At a recent pediatric meeting where we discussed the new recommendations from the American Academy of Pediatrics on screen time for children, the talk inevitably turned to parents, and the hazards of so-called “distracted parenting.”

Parents at the playground looking at their phones while their children play, unsupervised. Parents at the Little League game checking their email and missing the all-important at-bat. Parents at dinner focused on the action on their screens, rather than the real people around the table.

We don’t always like to admit it, but taking care of small children is often quite tedious. When my three children were small, I wouldn’t have made it through without a certain amount of distraction.

I believe as deeply as I believe anything that children need attention and interaction, conversation and story telling and reading aloud, discussions of what they see and do, silly games and family jokes, and all the other back and forth that goes with family life. Babies’ brains grow and connect in response to the richness of the “language soup” in which those babies live; the A.A.P. recommends “laps not apps,” and I am deeply skeptical of anything electronic that is marketed as “educational” for the very young (and especially skeptical when “studies” or “evidence” are used to do the marketing).

And yet, and yet. I am too old to have had the opportunity to check email on my phone while sitting down to breakfast with my children when they were young, or while hanging out with them on the playground, or doing my worktime at the cooperative day care center they attended. Therefore, I can say, with all due sanctimony, that I never ever did such a thing. Perish the thought.

Of course, my children would claim that we rarely sat down to breakfast — we often just grabbed things on the run. And they might point out that when we did sit down, I surreptitiously read the newspaper at the breakfast table. And I pulled a book out of my bag at the playground if I thought I could get away with it. Speaking of old technologies, at our day care center there was one father — a big-shot professor — who was so brave that he did the worktime while wearing his Walkman (remember those?).

And for that matter, may I call as my witness Abraham Lincoln, who is reported to have walked up and down the street in Springfield, Ill., in the mid-1800s, pulling his young sons in a wagon while reading a book (and as the story goes, he went right on reading when a child fell out of the wagon).

“I think the term distracted is so loaded,” said Dr. Jenny Radesky, a developmental behavioral pediatrician and assistant professor of pediatrics at the University of Michigan at Ann Arbor, who is one of the authors of the American Academy of Pediatrics new policy statement on media use for children from birth to age 5. Yes, she said, there are plenty of nonelectronic distractions out there. But the problem is, interactive technology and social media are designed to be emotionally absorbing and habit forming.

Thus, we do need to worry about what the greater availability (or intrusion) of messages and connectivity and all forms of entertainment are doing to our personal relationships, and keep a careful eye on our own adult wanderings in the world of electronic media, and what they do to our mealtimes, bedtimes, family times.

On the other hand, Dr. Radesky said, those same devices can help stressed parents get through the day. “It’s a huge source of humor and stress relief and connection to work,” she said. “Technology is a tool; it’s how you use it.”

In a perfect world we would meet up with friends at the playground and talk to live people while we all enjoyed watching our children play, which is yet another reason to try looking up from our phones and talking to the people around us. Most of us do need that adult contact in some form, and that should not in itself make us feel bad.

“Parenting young kids is frazzling to your brain,” Dr. Radesky said. Technology may help, she said, “if parents find it more organizing or more stress relieving to talk to a friend or text with a friend.”

We’re distractible because tending young children day after day after day can wear you down. The paradox of parenting is that the actual minutes and hours can creep; you can find yourself stuck in the world’s longest 15 minutes embedded in those fast-spinning years.

Enjoy those moments in the playground, and keep an eye on the monkey bars. Safety first. If the kids are old enough and safe enough for you to look away, you may get a few minutes to check in on your adult life, but remember that part of your job as a parent is setting limits. And remember that before you know it, you will be — believe it or not — telling your middle school or high school age children to look away from their screens, so act out the rules of civil discourse that you want your children to learn.

Yes, I saw that guy in the coffee shop who was so fixated on his tablet that he ignored his child’s shining eyes. Don’t be that guy. Yes, I saw that woman walking down the street with her little kid while her whole being was invested in her phone call. Don’t be her, either. Except, of course, once in a while, when we’re all that person.