We had the opportunity to take the Hero Splendor iSmart 110 for a quick spin in Gurugram. This is the first time that Hero has developed a motorcycle from its Centre for Innovation and Technology in Jaipur and kudos to Hero for doing a good job. Here are a few observations and first impressions that we had of the motorcycle. Please bear in mind that these are our seat-of-the-pants feel and we did not have the time to ride the bike to our heart’s content, as much as we would have wanted to.

1. Styling: A definite plus. With its catchy dual-tone colour schemes, a sharper headlamp, the sporty split grab rail and the overall styling of the motorcycle feels upmarket and will go a long way in making decision easier for prospective buyers. Also, the instrumentation console being part analogue and part digital adds a further touch of premium-ness to the bike. Black alloy wheels come as standard.

2. Features: Perhaps the most feature loaded motorcycle in the segment. The list starts with the i3S technology or the Idle Start Stop System. Simply put, if you put the bike into neutral, the engine shuts off after 5 seconds and comes back to life at the pull of the clutch. This is way easier than switching off the bike at traffic signals and then starting it again. Plus, it adds to fuel conservation, if not exceptional efficiency. The second being the AHO or auto headlamp on. Yes, akin to big motorycles, the headlamp starts automatically when you start the bike and stays on till you shut it off. We are glad that Hero is finally making use of international standards on its commuter motorcycles as well. Hi-5 Hero! 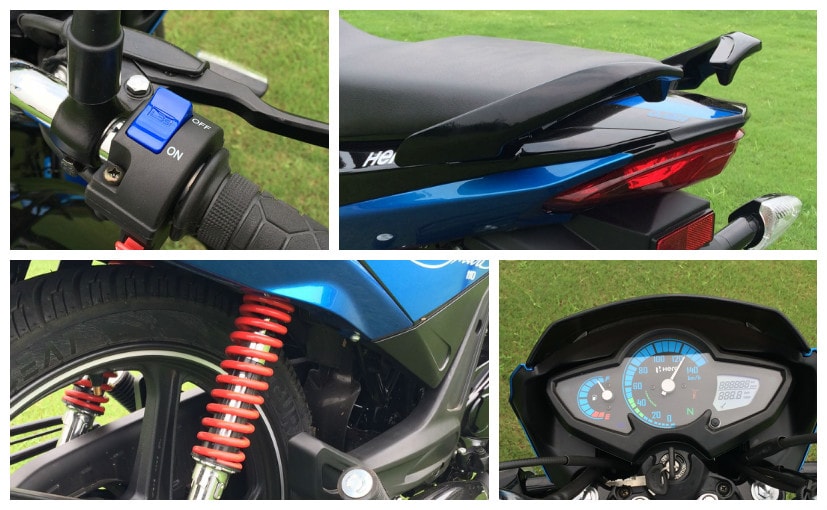 3. Engine and Transmission: the engine on the Splendor iSmart 110 is a peppy 110cc unit which is good for 9.4bhp and 9Nm of torque. The numbers are more than enough for the motorcycle to trundle around in town. It is mated to a 4-speed gearbox. The cylinder of the engine now points skywards. The reason being that the combustion is better and power delivery. The engine is BS-IV compliant too. So no future headaches for Hero with regards to conforming to emission norms. The claimed fuel efficiency is 68Km/l. 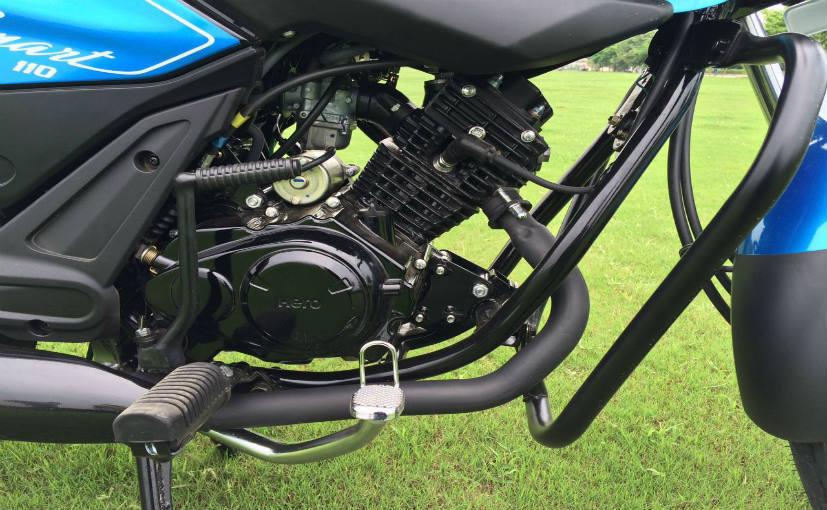 4. Ride, handling and performance: As we mentioned, the engine is definitely peppy. Hero says that the engine has ‘Torque-On-Demand’ as a feature and they were more or less right. There is enough pull in 3rd and 4th gears for the bike to go at higher speeds. The torque is widespread and will not let you down when you overtake that annoying slow car in the fast lane. Hero claims that the Splendor iSmart does 60kmph from standstill in 7.45 seconds. At this point, we will believe Hero for its claims. The ride is sorted, we will say. Not too jarring and not too soft either. The rear suspension is adjustable, so that’s taken care off as well. As far as handling is concerned, it’s a nimble motorcycle and at 115kgs, it’s easy to filter through traffic as well. The new dual-cradle frame with its better structural rigidity aids handling as well.

5. Comfort: The Splendor iSmart 110 is ergonomically sorted. The handlebar-seat geometry is upright, with a comfy seat. Long commutes will not be a thing to look down upon. There is enough space for a pillion rider as well, thanks to a long seat.

6. Verdict: For the audiences it’s targeted at, the Hero Splendor iSmart makes a solid case for itself. Big on style and features, decent performance and the name ‘Splendor’ in itself is synonymous with trust and faith. With a compelling price of 53,300 (ex-showroom, Delhi) it is a value for money proposition. That’s what will be on top of people’s priority in this segment as well.