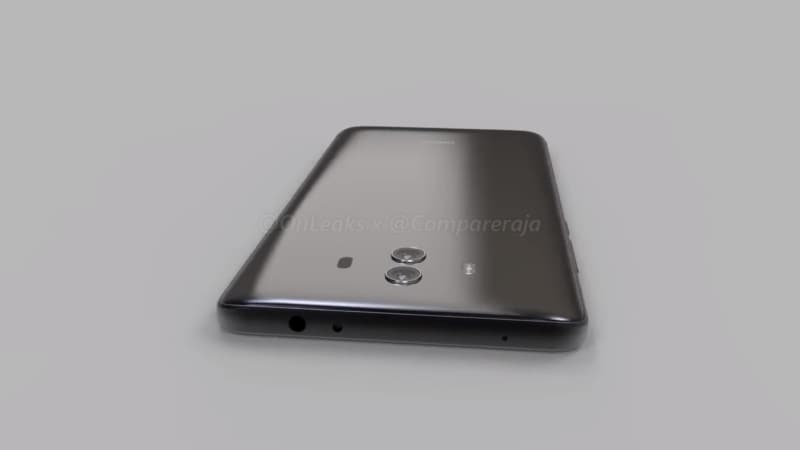 Last month, Huawei confirmed that the company will be launching its Mate 10 smartphone on October 16 but while we are still more than a month away from the aforementioned date, the leaked renders and video of the smartphone have been leaked on the Internet.

While the company’s official render for the Huawei Mate 10 already gave us the glimpse of the smartphone’s design from the rear end, the new renders and video show, shared by @onleaks and @compareraja, the front of the handset as well. The newly leaked render video suggests that the smartphone might feature glass back, which should also provide the support for wireless charging to the phone.

In the video, the USB Type-C charging port can be seen at the bottom along with the speaker grille while the 3.5mm headphone jack is placed at the top-end of the Huawei Mate 10 smartphone. The teaser image shared by the company last month confirmed that the Mate 10 will come with Leica-branded lenses. Just like the Mate 9, the upcoming Mate 10 will have a vertical dual rear camera setup on the back near the centre.

To recall, the Huawei Mate 10 has also been rumoured to come with an iris scanning feature, and is expected to be powered by Huawei’s anticipated HiSilicon Kirin 970 SoC, which will be based on the 10nm fabrication process. It is expected to sport a 6-inch full-HD (1080×2160 pixels) display with an aspect ratio of 18:9. Huawei will likely tease more features of the Mate 10 as we approach the October 16 launch. The smartphone is expected to be priced around CNY 4,000 (roughly Rs. 38,500).

[“Source-gadgets.ndtv”]
10 Ahead and Huawei in Launch Leaked Mate Month: Next of Renders; Video 2017-09-09
Loknath Das
to in With for and of on India Launched The at Samsung Launch A iPhone Android Galaxy More Apple Rs New Be 7 Price Google