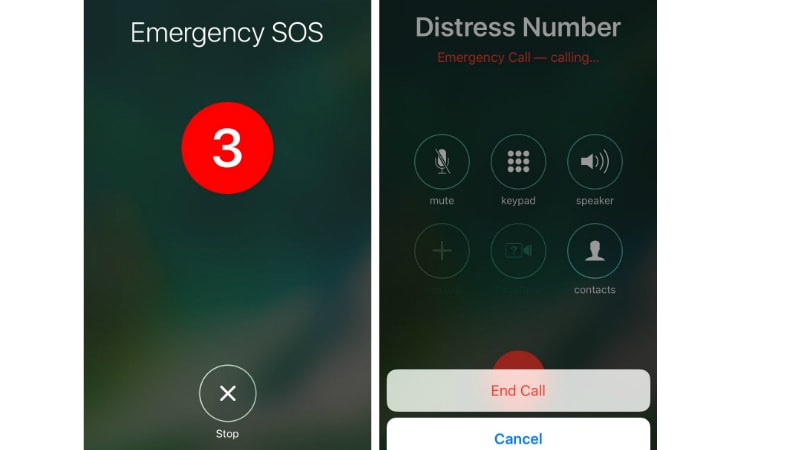 Apple has released iOS 10.2 for iPhone, iPad and iPod touch users. The update for the first time brings an India-specific feature – the SOS or panic button – following the government’s new mandate. Additionally, iOS 10.2 brings a host of other improvements including 100 new emojis, new effects in iMessage, new TV app, and improved camera features.

After upgrading to iOS 10.2, the Emergency SOS option can be found in Settings -> General menu. You can personalise the SOS settings under this option, such as how many times you will have to press the Power button to make the Emergency SOS call, whether to sound a countdown for that or not, etc. For example, by pressing the power button rapidly, a phone call to 112 will be made. This is in accordance to the government’s mandate of making the SOS feature compulsory in all phones. India will adopt 112 as the new single emergency number starting January 1, 2017.

(Also see:Panic Button for Women Mandatory on Mobiles From January 1: Prasad)You will notice that 112 is automatically saved as Distress Number in Contacts after you install iOS 10.2. While 112 is the default number, you can even add more numbers to alert during emergency via the Health app.

This update will be available for iPhone 5 and later devices, iPad fourth generation and later devices, and iPod touch 6th generation and later devices. Head over to Settings > General > Software Updateto download and install the new update. Alternatively, you can even update via iTunes. First install iTunes, and then connect your iOS device to your PC or Mac. In iTunes select your device’s icon on the top bar, Click the Summary tab and then click Check for update. Now, click Download and update. At this point, you should follow the simple on-screen instructions to install iOS 10.2. Ensure that you have at least 50 percent battery backup, and a strong Wi-Fi connection when attempting to update. Don’t forget to backup your iOS device before you download and install the update.

The other big change, as mentioned, is the addition of 100 new Unicode 9.0 emojis that represent different professions, sports, animals, and foods. More diverse characters and expressions like face palm, shrug and fingers crossed have been added. There’s also the addition of a new TV app, exclusive only to US users for now, for watching various TV shows, subscribing to premium content, and streaming it via the app.

iMessage also gets the new Send With Love and Celebration full-screen effects. iPhone 7 and iPhone 7 Plus users get new wallpapers with this update. There’s also a new Preserve Settings in Camera that lets you save your last mode. You can preserve the last mode, such as video or square, rather than the default reset to photo every time you close and open the Camera app. Lastly, several technical improvements and bug fixes are also a part of the update.

Here are the entire release notes:
iOS 10.2 introduces new features including the TV app (US Only), a new and unified experience for accessing your TV shows and movies across multiple video apps. Emoji have been beautifully redesigned to reveal even more detail and over 100 new emoji have been added including new faces, food, animals, sports, and professions. This update also includes stability improvements and bug fixes.

Photos
Improves stabilization and delivers faster frame rate for Live Photos
Improves accuracy of groupings of similar photos of the same person in the People album
Fixes an issue where Memories might generate a memory from photos of screenshots, whiteboards or receipts
Fixes an issue where the camera would stay zoomed in after switching back from the Camera Roll on iPhone 7 Plus
Additional support for RAW digital cameras

Music
Swipe up the Now Playing screen to more easily access Shuffle, Repeat and Up Next
Choose how to sort Playlists, Albums, and Songs in Library

News
Stories you’ve saved for later now appear the new Saved section
The best paid stories from channels you subscribe to will now appear in a dedicated section in For You
It’s now easier than ever to get to the next story, just swipe left or tap Next Story while reading

[“source-ndtv”]
10.2 100 and Brings Button Emojis India-Specific iOS More New Released SOS 2016-12-15
srijita
to in With for and of on India The Launched at Samsung Launch A iPhone Android Galaxy More Apple Rs New Be 7 Price Google