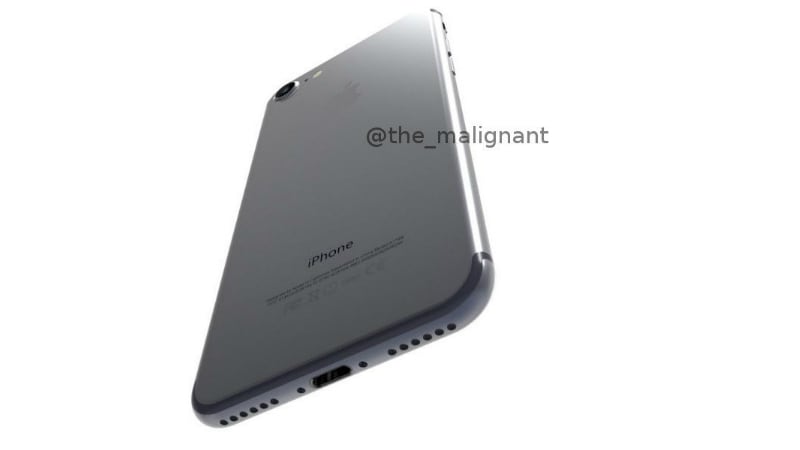 Apple is about to launch the iPhone 7 in a few hours from now, but the last minute leaks refuse to stop. There is a host of information surfacing online about the iPhone 7 colour variants, specifications details, and waterproofing capabilities. Additionally, a press render of the iPhone 7 seem to have also been leaked giving us a sneak peak at what Apple could be unveiling tonight.

First up, tipster Malignant has leaked the first render image of the iPhone 7, and it testifies to the death of the 3.5mm audio jack. The bottom of the device sees two speaker grilles, with the Lightning port sitting in the centre. The camera bump is protected by the casing ring, and the redesigned antenna bands are also seen.

Remember the Space Blue variant tipped in the early days? Well, if MobileFun is to be believed, then Apple is indeed introducing a Blue variant, but it will be much lighter than what was leaked earlier. The retailer has leaked an image of the Light Blue variant, claiming it to be a real photo of the device. It’s only a matter of hours before we know for sure.

An Italian blog has also leaked a picture showing retail boxes of the iPhone 7. According to iPhoneItalia, the boxes were snapped at manufacturer Foxconn’s site when almost 370,000 units were being prepared for shipment to US, UK, and the Netherlands. The publication also confirms Evan Blass’s September 16 market launch date, citing people close to European carrier Three.

Vietnamese electronics store PhonGee has published few live photos of a working 4.7-inch iPhone 7 as well. The camera is redesigned with a brighter True Tone flash that houses four LEDs. The SIM tray images show a rubber gasket for added waterproofing. The iPhone 7 is expected to come with IPX7 certification, which means it can last for about half an hour in one metre underwater. The pictures also reveal a Dark Black colour variant option that has been heavily rumoured in the past. Apple is expected to unveil a Dark Black and a Glossy Piano Black colour variant for the new iPhone 7. However the Glossy Piano Black is expected to be exclusive to the high storage 256GB storage variant.

In any case, we recommend you to take all of this information with scepticism as official details are now hours away. Rest assured, when the event begins at 10.30pm IST, Gadgets 360 will offer you comprehensive coverage. Stay tuned.

[“source-gadgets.ndtv”]
7 Ahead Colour Features iPhone Launch Leaked More New of Specifications 2016-09-08
srijita
to in With for and of on India The Launched at Samsung Launch A iPhone Android Galaxy More Apple Rs New Be 7 Price Google