With the iPhone SE, Apple Hopes Small Is Big Again 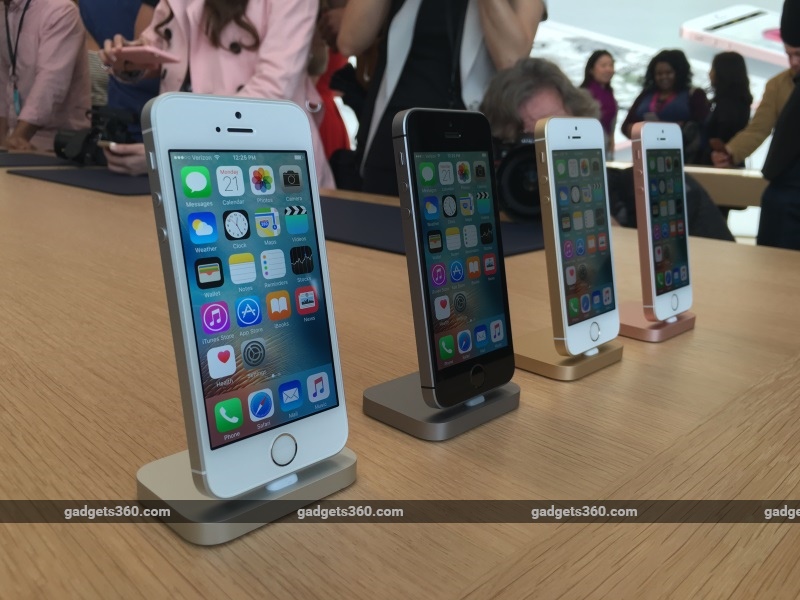 Apple Inc on Monday launched its least expensive iPhone, the $399 (roughly Rs. 27,000) iPhone SE (Pictures), filling a hole in its product lineup with a small-screen model that targets new customers in emerging markets and fans of smaller phones as the company tries to reverse falling phone sales.

The low-key launch, held at the technology company’s Cupertino, California campus rather than its traditional splash at a much larger venue in San Francisco, did not wow tech experts or investors.
But the new mid-range model was seen as necessary to counter the dominance of cheaper phones running Google’s Android system.

“There are people who want that smaller screen size,” said Bob O’Donnell of TECHnalysis Research. “You do a price cut when you need to drive the market a bit more,” though he questioned if the price was low enough to generate significant demand.

Apple is hoping the cheaper model will stimulate overall iPhone sales, which it expects to decline this quarter for the first time since it essentially created the smartphone market nine years ago.

The new model did not allay investor concerns that Apple, which celebrates its 40th birthday on April 1, has no obvious blockbusters in its pipeline.

“Apple is so big now that nothing seems to be earth-shaking anymore, and the strategy seems to be turning to offering complementary products like watch bands so they can maintain their sales momentum,” said Skip Aylesworth, portfolio manager of the Hennessy Technology Fund.

The company showed off new wristbands for the Apple Watch and a new iPad Pro tablet at Monday’s event, and a robot called Liam to take apart old iPhones and reuse the materials.

But none of those moves generated much excitement among investors.

The iPhone SE’s 4-inch screen is the same size as the iPhone 5c, which fizzled and is no longer available on Apple’s online store. The iPhone 6s, which previously had the smallest screen of the sixth-generation line-up, is 4.7 inches.

The model represents Apple’s second bid for the crowded mid-tier market after an unsuccessful foray three years ago. Orders start on Thursday, and the phone will be available next week.

The starting price is well below the $649 for the current top iPhone model without a contract, which is beyond the reach of many. With Apple’s vaunted A9 chip, the new phone is twice as fast as Apple’s previous attempt at an entry-level phone, launched in 2013. It also runs Apple Pay and comes in the wildly popular rose gold colour.

The more compact phone design comes after Apple expanded the size of the screens in its high-end iPhone 6 and iPhone 6 Plus phones in 2014 to as large as 5.5 inches. That was broadly seen as an attempt to match rival Samsung Electronics with its large-screen Galaxy phones.

Apple is still expected to introduce a top-of-the-line, large-screen iPhone 7 late this year. The company now appears to be following a two-pronged approach to attack the top and the middle of the smartphone market.

“If these smaller phones are a gateway into the Apple ecosystem then over the long term it improves Apple’s chances of growing at a comfortable rate,” said David Meier, a fund manager with Motley Fool Funds.

Reaction to the multi-model strategy was mixed on social media.

“So what’s Apple’s line-up next year? iPhone 7, 6s and a new SE?” tweeted Benedict Evans, a partner at venture capital firm Andreessen Horowitz. He also posted an image of several iPad models with the caption: “Please tell me this is getting cleaned up.”

Cook defends privacy stance
Before the launch, Apple Chief Executive Tim Cook played up the company’s role as a staunch defender of its customers’ data and as a good corporate citizen with announcements of a new recycling effort and software for mobile apps that help people manage health conditions.

He repeated his refusal to comply with a US court order to unlock an iPhone belonging to one of the shooters in a December attack in San Bernardino, California.

Apple has a responsibility to protect customers’ data and privacy, Cook said, adding that Apple “will not shrink from that responsibility.” His statement was greeted by applause from the audience.

The tech company’s dispute with the US government has become a lightning rod for a broader debate on data privacy in the United States. The company is set to square off against the US government at a court hearing on Tuesday, likely the first round in a long legal fight to avoid being forced to decrypt the iPhone.