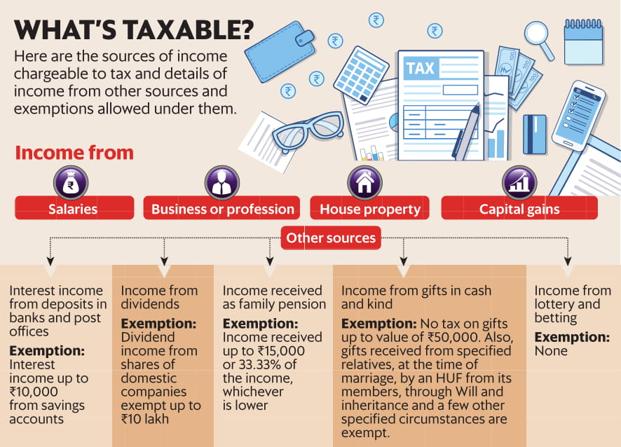 Here are the sources of income chargeable to tax and details of income from other sources and tax exemptions allowed under them. Graphic: Mint

The income tax return filing due date for assessment year 2018-19 is less than a week away, and if you haven’t already filed your ITR, you better hurry. Kartikey Kulshrestha, 23, a Delhi-based lawyer, who is filing his return for the first time, does not want to make a mistake at the last minute and, therefore, is taking the help of a chartered accountant. “Since I am a professional, my income comes under income tax head ‘income from business or profession’. So it is even more difficult for me to figure out how to do it,” he said.

Whether you are taking the help of a professional or doing it yourself, you must know the sources of income you have. While typically a lot of you would have only one source of income—salary, business or professional income—there are a few other heads that get counted as sources of income. One such is income under the head “income from other sources”.

The Income Tax Act, 1961, has stipulated five sources of income—salary, business or profession, house property, capital gains and other source. Income from other sources is the residual source of income, which means any income which is chargeable to tax, but does not fall under the category of the other four heads

Here are five common types of income that need to be disclosed under “income from other sources” while ITR filing for 2018-19:

Banks and post offices pay interest on the balance in the savings accounts you have with them. This interest needs to be reported under other sources of income, and so does the interest earned on fixed deposits (FDs), products typically bought by risk-averse individuals.

However, for a residential individual or Hindu Undivided Family (HUF), for AY19, interest earned up to ₹ 10,000 in a financial year from savings accounts is exempt from tax under Section 80TTA of the Act. So, while filing your ITR, don’t forget to claim tax exemption on saving account interest.

Taxability of dividend received from shares of a company depends on the country of origin. “Dividends from domestic companies are normally exempt, as the company declaring dividend pays dividend distribution tax. But if the aggregate amount of dividend received during the year exceeds ₹ 10 lakh, then it is chargeable to tax at the rate of 10%,” said Ankit Agarwal, managing director, Alankit Ltd.

If you have invested in shares of a foreign company, dividends will be taxable under other sources. However, if taxes are paid on such dividend in the country where the company is based, you may claim relief under Double Taxation Avoidance Agreement (DTAA), if applicable. If no such agreement exists, an investor can claim relief under Section 91. Say, you have invested in the shares of a foreign company abroad and earn ₹ 1 lakh as dividend, and have paid ₹ 10,000 as income tax on this in that country. Then, while filing your return in India, if your tax liability on such income is ₹ 30,000 (for the highest tax bracket of 30%), you are allowed to claim relief of ₹10,000 and pay only ₹ 20,000 as tax.

Pension received by a dependant family member of an employee after his death is known as family pension and is considered as income from other sources for the recipient. Dependant members include spouse, children below the age of 25 years, unmarried daughter, and dependant parents in some cases.

The Act provides that any gift received in excess of ₹ 50,000 in cash, demand draft, cheque or specified assets by an individual or HUF is income from other sources. If the value exceeds ₹ 50,000, the entire amount is taxed. Remember that the tax applies not only to gifts received in cash, but also to those received in kind, such as immovable property (including land and building) and specified moveable properties such as jewellery, paintings, shares, debentures, bullion and archaeological collections. The gift is taxable only in the hands of the recipient.

However, there is no tax if the gift is received from specified relatives, at the time of marriage, by an HUF from its members, through Will and inheritance and a few other specified circumstances.

“Winnings from lotteries, crossword puzzles, races (like horse racing), card games, gambling or betting, is classified as income from other sources,” said Agarwal. As per Section 115BB of the Act, the entire income from these sources will attract 30% tax, along with applicable cess and surcharge. Not only are incomes from lotteries and game shows charged at the highest tax rate, no deduction or exemption is allowed on these. The winner cannot even claim the basic exemption of ₹2.5 lakh, up to which no income tax is charged.

What you should do

Whether the income is exempt or taxable, disclose it in the ITR filing. “Though there are no penalties for non-disclosure of such income but it allows taxpayers to keep a record of the source of wealth if asked to explain during the course of any inquiry or assessment by the tax department,” said Amit Maheshwari, partner, Ashok Maheshwary & Associates LLP, a chartered accountancy firm.

Also, mind the ITR form you choose. “While selecting the ITR, look at different sources of income. Income from other sources and exempt income can be declared in any form (ITR-1 to ITR-4),” said Suraj Nangia, Partner, Nangia Advisors LLP. In ITR-1 and ITR-4, one can disclose all income except taxable dividends and income from winning lotteries or income from horse races, said Maheshwari.

[“Source-livemint”]
AY2018-19: Check filing From Income ITR Other Sources Your 2018-07-31
Loknath Das
to in With for and of on India The Launched at Samsung Launch A iPhone Android Galaxy More Apple Rs New Be 7 Price Google