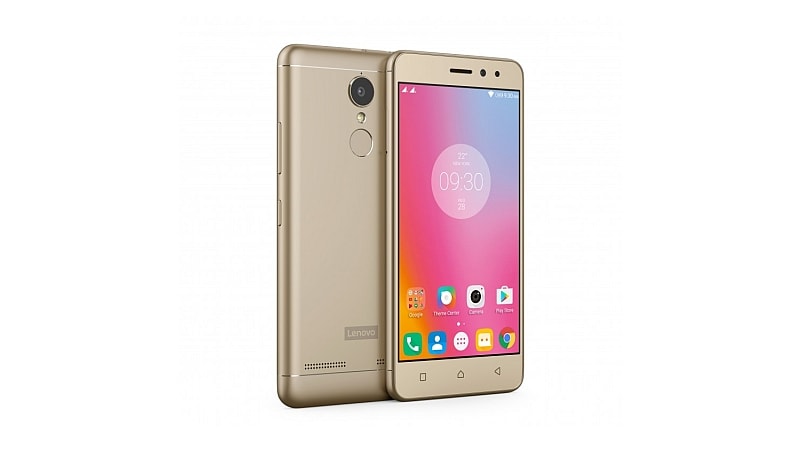 Lenovo on Tuesday launched the K6 Power in India. Priced at Rs. 9,999, the 4G-enabled smartphone will be available exclusively in India via Flipkart in an open sale starting 12pm IST on December 6. The company has launched the 3GB RAM/ 32GB storage model in the country in Silver, Gold, and Dark Grey colour variants.

The dual-SIM (Nano-SIM) Lenovo K6 Power runs on Android 6.0 Marshmallow with the company’s own Vibe Pure UI skin on top. The smartphone was first launched at IFA 2016, with its highlights being a large 4000mAh battery, Dolby Atmos audio enhancements for earphones and stereo speakers, TheaterMax media-consumption service, and a fingerprint sensor that’s located on the rear panel. The smartphone was launched alongside the Lenovo K6 and Lenovo K6 Note at the trade show.

The new Lenovo smartphone sports a 5-inch full-HD (1080×1920 pixels) IPS display and is powered by a 1.4GHz octa-core Qualcomm Snapdragon 430 SoC and Adreno 505 GPU. The K6 Power bears a 13-megapixel rear camera with a Sony IMX258 sensor, PDAF and LED flash, apart from an 8-megapixel front camera with a Sony IMX219 sensor and a wide-angle lens.
The Lenovo K6 Power’s built-in storage is expandable via microSD card (up to 128GB). Connectivity options on the smartphone include 4G LTE, VoLTE, Wi-Fi 802.11 b/g/n, Bluetooth 4.2, FM radio, Micro-USB, and GPS/ A-GPS. It measures 141.9×70.3×9.3mm and weighs in at 145 grams. The smartphone bears an accelerometer, gyroscope, proximity sensor, and digital compass.
The large 4000mAh battery is rated to deliver up to 96.5 hours of music playback, 13.6 hours of video playback, 48 hours of voice calls, 12.6 hours of Web surfing, and 649 hours of standby time. The company has also introduced the Ultimate Powersaver app for the Lenovo K6 Power, a power-saving mode that extends battery life by reducing app and data usage. There is also a reverse charge option, allowing the smartphone to be used as a power bank.

Lenovo is also touting the App Lock functionality powered by the fingerprint sensor. Other Vibe Pure UI customisations include Dual Apps (allowing apps to be used with two different accounts on the same phone), as well as the Long Screenshot features.

The company at the event said that since their launch in India 2.5 years ago, Lenovo and Motorola have sold over 13 million handsets in the country.