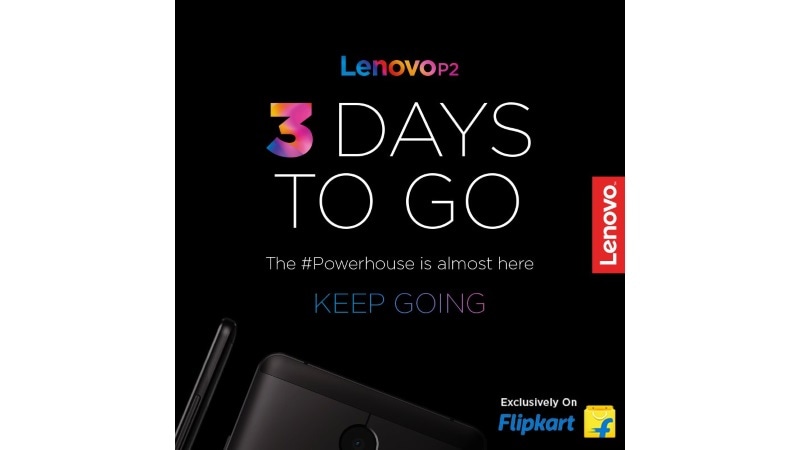 Lenovo P2 smartphone will be made available in India exclusively via Flipkart on Wednesday, January 11, the company has revealed. Lenovo P2 price in India is the only open question for the smartphone that has already made an appearance in other markets.

The smartphone’s India launch was teased by the company earlier this month on Twitter. Even though company’s earlier teaser didn’t mention any release date for the smartphone, Lenovo has now said that the P2 will be unveiled on Wednesday at 12:30pm IST.

Even in India, the phone is expected to be made available with both the above mentioned memory/ storage variants. The highlight feature for the Lenovo P2 is its 5100mAh battery, which comes with fast charging capability.

Lenovo’s dual-SIM smartphone runs Android 6.0 Marshmallow out-of-the-box, and has a 5.5-inch full-HD Super AMOLED display. The Lenovo P2 is powered by a 2GHz Qualcomm Snapdragon 625 MSM8953 processor, and as we said, this is coupled with memory options of 3GB or 4GB of LPDDR3 RAM. In terms of optics, the smartphone comes with a 13-megapixel rear camera with a Sony IMX258 sensor and a 5-megapixel camera at front for taking selfies.

The phone has a unibody metal design and comes with either 32GB or 64GB of inbuilt storage, expandable via microSD card (up to 128GB). In terms of connectivity options, the Lenovo P2 offers 4G LTE, Wi-Fi 802.11ac, Bluetooth v4.1, and FM radio. The smartphone is expected to be made available in Champagne Gold and Graphite Grey colour variants.