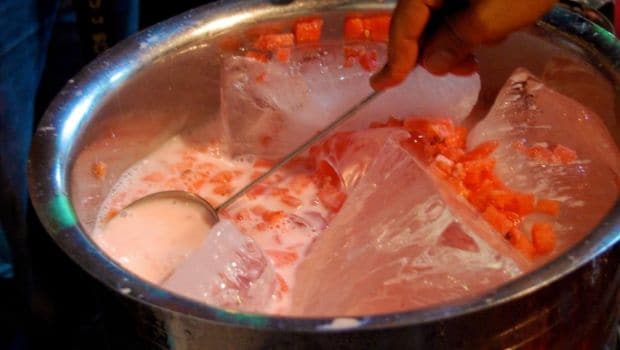 All drenched, and desperately looking for that one summer quencher to infuse some life back in you? Maybe the gullies of Old Delhi has the elixir you have been hunting for. Delhi has already been facing very hot temperatures. It is over 40 degrees outside and heading out in this scorching weather could be a spoiler. However, if you happen to be in Old Delhi then you definitely shouldn’t be missing out on this purani dilli delight, made with oodles of our summer favourite roohafza, milk, sugar, watermelons and lots of love. Yes, the drink is called the Pyaar Mohabbat Sharbat, and with the kind of love it has garnered in the recent times, there seems no name more befitting. The Pyaar Mohabbat Sharbat Wala is slowly turning into a landmark in Old Delhi!

Pyaar Mohabbat Sharbat Wala is located opposite Jama Masjid where he sells the refreshing drink for a meager INR 10 a glass! The drink is also known as Pyaar Mohabbat Mazza or Pyaar Ishq Mohabbat Sharbat.The thela or the handcart is run by Nawab Qureshi, a native of Uttar Pradesh, who came to Delhi a couple of years back to try his fortune. He sells the refreshing cooler exclusively in the summer months. Watermelon is a key ingredient, along with rose flavoured milk. Together they lend to the pretty pink hue of the drink.

Watermelons are freshly cut and added in the milk, which gives it a nice crunch along with the sweetness of the flavoured milk. The milk cartons are meticulously stacked on top of each other to make sure he doesn’t run out of it in times of huge rush.

Anubhav Sapra, Founder of Delhi Food Walks, says, “In milk he adds Rooh-afza, chashni (sugar syrup thin enough to allow quick swirling) and finally some freshly cut watermelon cubes. He used to sit a few blocks away before but now for some years, he has been sitting adjacent to Aslam Chicken Corner, near Jama Masjid. He also sells a special apple drink, where in place of watermelons, diced apples are added. But its not as popular as its watermelon variant.”

He adds, “The drink gets especially popular during Ramzan. It is a custom to break your fast, and start your Iftar in the evening with a rose flavoured drink. Qureshi gives the drink his own refreshing spin by adding watermelon cubes.”

Pyaar Mohabbat Sharbat is available all through the summer at Nawab Qureshi’s stall in front of 1149, Matia Mahal, near Jama Masjid, Delhi. Next time you head out towards old Delhi, do stop by for your dose of a chiller.