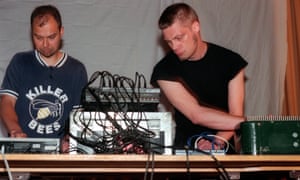 As one half of Pan Sonic with Ilpo Väisänen, Mika Vainio had a transformative effect on the deconstructed techno that lurks around the fringes of dance and electronic music. In fact, when news of his death last week, at just 53 years of age, was announced, I could think of few artists of his generation who had such a large influence in their field.

Vainio’s influence on ambient and industrial electronic music was somewhat unspoken in his lifetime. He was not a figurehead of a scene, but pretty much all booming palettes of mechanical sound being made today nod in some way to Vainio and his work with Pan Sonic (who started out as Panasonic in 1993 before the Japanese electronics manufacturer of that name threatened legal action).

Music producers are described as writing beats, but Vainio’s beats weren’t beats at all, they were the sound and feeling of a black hole opening up in the centre of your chest. I’m too young to have been around for Pan Sonic’s shows in London in the late 1990s and early 00s, but David Toop wrote, in his book Haunted Weather, of the band’s physical sonics as “a manifesto for the poetry of electricity”. Their sound during those shows was, in his words, like “flares, vapour trails, LEDs, neon tubes close to death, heart murmurs, apertures opening and closing in cement walls, tiny mechanised guillotines snipping the heads from tin soldiers, sheets of led unfurling in underground car parks”.

I saw Vainio play solo when it worked and when it didn’t: the latter was like helicopter blades sputtering to a standstill; but the former could be electrifying. During a show at Koko in London with Nurse With Wound, Vainio and Steven Stapleton made the handrails rattle in their fixings as cacophonous rumblings bounced around the plasterwork roof. My body hummed and the whole place vibrated.

It would be an understatement to say Vainio was not very vocal. While his music spoke volumes, conjuring countless wild images, the man himself did not. I interviewed him in 2013 at his flat in Berlin, for the Wire magazine’s Invisible Jukebox feature, and I was warned I might get one-word answers. He was certainly reserved, but he was also articulate. Surrounded by stacks of records, he identified the intros to delta blues and dub, and spotted a Sunn O))) recordin a few seconds flat. He told me stories about the music he loved, about how the outsider rockabilly musician Hasil Adkins always carried meat and sausages in his pockets. He spoke about putting acid house raves on as a teenager in Turku, Finland, and about his first band, a four-piece called Gagarin-Kombinaatti, who were influenced by Einstürzende Neubauten but who only ever played one show. He had been going through their old rehearsal tapes.

I asked him how he felt about influencing a younger generation and he sidestepped the question, saying that he thought of his sound as just a continuation of something that had been done before, combining industrial techno with electroacoustic music.

Vainio released music regularly, often putting out a couple of records each year, on Paul Smith’s influential label Blast First, Jimi Tenor’s Finnish label Sähkö or the British label Touch. His minimal techno output, as Ø, accomplished the ultimate in bare, repeating bleeping motifs – Metri is the Finnish version of Robert Hood’s album Minimal Nation, and was released in the same year, 1994. He collaborated with Björk (who interviewed him in her 1990s Modern Minimalists BBC TV show), with Suicide’s Alan Vega, with Japanese noise musicians Keiji Haino and Merzbow, and he played in a duo with Sunn O)))’s Stephen O’Malley. He also made multiple recordings with the saxophonist Lucio Capece, among many others.

In recent years, Vainio had slowed down a little, but he hadn’t tailed off musically. His 2013 album Kilo was punishing and spacious, the Gagarin-Kombinaatti recordings were released on Sähkö in 2015, and Pan Sonic’s soundtrack to the Finnish film Atomin Paluu was released last year. As further details of his death are reported – he apparently died in France following a fall – I listen to his sound, not to his story, to work by a musician whose quiet influence is deafeningly felt.