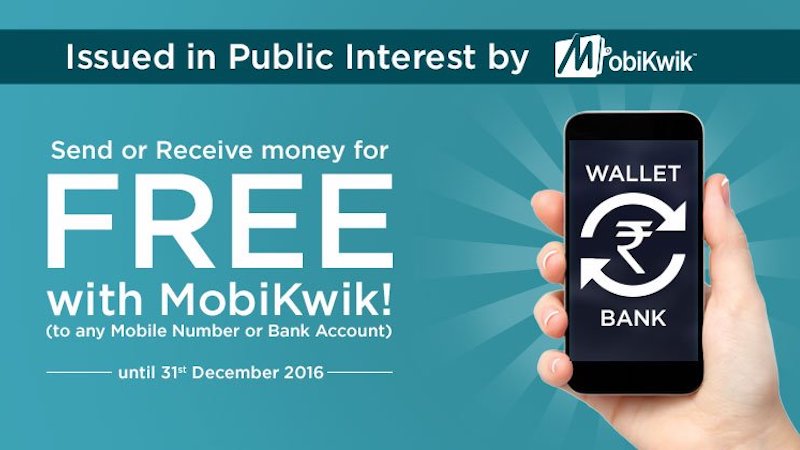 Soon after Paytm’s move, MobiKwik has now announced that its users can transfer money from their mobile wallets to any bank account at a zero percent fee. Earlier, the digital wallet company used to charge 4 percent for a non-KYC compliant user and 1 percent fee for a KYC compliant user.

This move comes after PM Narendra Modi announced the demonetisation of Rs. 500 and Rs. 1,000 notes in the country, leading to a sudden cash shortage and long queues outside banks. This move is aimed to urge merchants to shift to their digital wallet for everyday transactions.

“We support Indian government’s bold currency reform that is a long term move to eliminate black money and corruption in India. However, masses are facing issues in procuring and transacting with cash. To help them overcome this challenge, we have announced 0 percent fee on bank transfers,” co-founder of MobiKwik Bipin Preet Singh said in a statement.

Singh feels that demonetisation will be very beneficial to the digital finance industry. He told Gadgets 360 that he believes that this is a “surgical strike on cash”, and says: “Rs. 500 and Rs. 2000 notes will have lost credibility, they will be seen as insecure. If you’re using any kind of big notes, to pay your household help, for cash on delivery, and so on, it will be less trustworthy. As a customer, you will have a strong pull factor against using cash.”Paytm announced the same move yesterday, however it will levy 1 percent fee for its services. Since the demonetisation announcement, MobiKwik claims to have registered 18 fold growth in transactions.