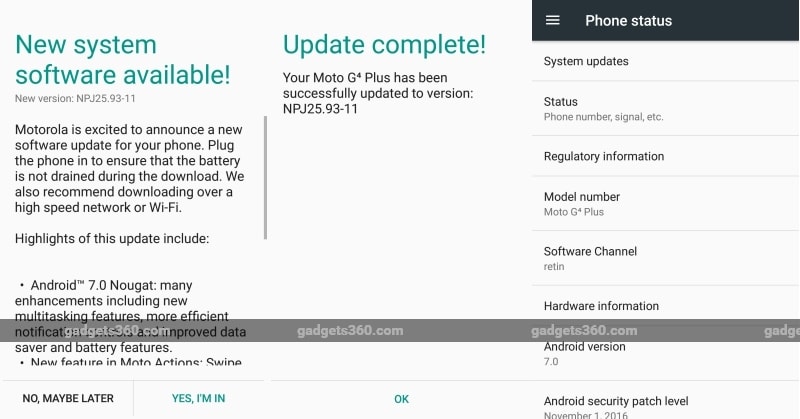 Roughly two months after the phased global rollout began, the Moto G4 and Moto G4 Plus smartphones have started receiving the Android 7.0 Nougat update in India. Notably, the update that’s rolling out in India ships with the November Android Security Patch.

Moto G4 and Moto G4 Plus users in India should start seeing a notification for the update, which says “new system software is available!”. Users who see this message should select Yes, I’m in, and once the update is downloaded, click on Install Now. Those who haven’t received a message should go to Settings > About Phone > System updates to check for availability, and then if an update is available, follow the above process.

The company warns users that the Android 7.0 Nougat update should be downloaded and installed on when the phone is connected to a Wi-Fi network, and only if the phone has more than 50 percent charge. It also warns that the update will take up to 20 minutes to install.

The Android 7.0 Nougat update for the Moto G4 and Moto G4 Plus has been detailed comprehensively on the company website, and according to Lenovo, incoming changes include “new multitasking features, more efficient notification controls and improved data saver and battery features.”

Moto-specific updates, beyond what Android 7.0 Nougat brings, include a new Moto action called Swipe to shrink the screen. On the Moto G4 Plus, the company has added a new setting to disable and enable locking the screen when the screen is on and you touch the fingerprint sensor. The settings can be accessed from Settings on the app tray, scrolling down to Security, and then tap on the screen lock gear icon.
[“source-ndtv”]

'Moto 7.0 Android G4 in India Nougat Plus Receiving Start Update 2016-12-30
srijita
to in With for and of on India The Launched at Samsung Launch A iPhone Android Galaxy More Apple Rs New Be 7 Price Google