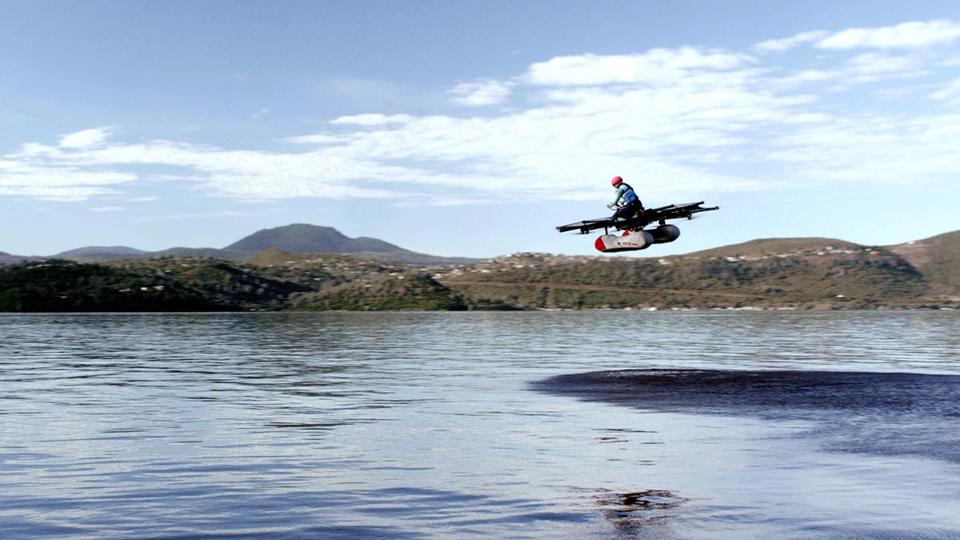 The Kitty Hawk Flyer is one of several prototypes being designed by Kitty Hawk, a start-up based in Mountain View, Calif.

CLEARLAKE, Calif. — On a recent afternoon, an aerospace engineer working for a small Silicon Valley company called Kitty Hawk piloted a flying car above a scenic lake about 100 miles north of San Francisco.

Kitty Hawk’s flying car, if you insisted on calling it a “car,” looked like something Luke Skywalker would have built out of spare parts. It was an open-seated, 220-pound contraption with room for one person, powered by eight battery-powered propellers that howled as loudly as a speedboat.

The tech industry, as we are often told, is fond of disrupting things, and lately the automakers have been a big target. Cars that use artificial intelligence to drive themselves, for example, have been in development for a few years and can be spotted on roads in a number of cities. And now, coming onto the radar screen, are flying machines that do not exactly look like your father’s Buick with wings.

More than a dozen start-ups backed by deep-pocketed industry figures like Larry Page, a Google founder — along with big aerospace firms like Airbus, the ride-hailing company Uber and even the government of Dubai — are taking on the dream of the flying car.

The approaches by the different companies vary and the realization of their competing visions seems far in the future, but they have one thing in common: a belief that one day regular people should be able to fly their own vehicles around town.

“I love the idea of being able to go out into my backyard and hop into my flying car,” said Brad Templeton, a Silicon Valley entrepreneur who has served as a consultant on Google’s self-driving project. “I hate the idea of my next-door neighbor having one.”

Kitty Hawk, the company backed by Mr. Page, is trying to be one of the first out of the gate and plans to start selling its vehicle by the end of the year.

The company has attracted intense interest because of Mr. Page and its chief executive, Sebastian Thrun, an influential technologist and self-driving car pioneer who is the founding director of Google’s X lab.

Mr. Page declined a request for an interview but said in a statement: “We’ve all had dreams of flying effortlessly. I’m excited that one day very soon I’ll be able to climb onto my Kitty Hawk Flyer for a quick and easy personal flight.”

During his recent test flight, Cameron Robertson, the aerospace engineer, used two joysticklike controls to swing the vehicle back and forth above Clear Lake, sliding on the air as a Formula One car might shimmy through a racecourse. The flight, just 15 feet above the water, circled over the lake about 20 or 30 yards from shore, and after about five minutes Mr. Robertson steered back to a floating landing pad at the end of a dock.

The Kitty Hawk Flyer is one of several prototypes the start-up, based in Mountain View, Calif., is designing. The company hopes to create an audience of enthusiasts and hobbyists, who later this year will be able to pay $100 to sign up for a $2,000 discount on the retail price of a Flyer to “gain exclusive access to Kitty Hawk experiences and demonstrations where a select few will get the chance to ride the Flyer.”

“We have been in contact with the F.A.A. and we see the regulators as friends,” Mr. Thrun said in an interview. He agreed that concerns about vehicles flying over our heads were legitimate. “I believe that all of us have to work together to understand how new technologies will shape the future of society, ” he said.

Two years ago, Mr. Thrun recruited two other pioneers, Mr. Robertson and Todd Reichert, who were aerospace engineers from AeroVelo, a University of Toronto spinoff company that won a coveted prize for a human-powered helicopter and set the land speed record for a bicycle last year.

They are flying under a special Federal Aviation Administration category for ultralight aircraft that does not require a pilot’s license and is intended for recreational flying in uncongested areas. To add an extra margin of safety, the Kitty Hawk engineers are sticking to flying over open water. The company said the final commercial product would look different and be far quieter than the test model.

“We hope that this is more of an exciting concept than what most people have had in their minds about flying cars,” Mr. Robertson said. “This is not yet that product in terms of what we will say and what it can do, but I think it demonstrates a vision of the future.”

Kitty Hawk could face stiff competition, not just from about a half dozen start-ups, but from the giant Airbus, headquartered in Blagnac, France. The aerospace firm has announced two different vertical takeoff and landing, or VTOL, concepts and is reported to be planning an initial test flight before the end of the year.

At the Geneva International Motor Show last month, Airbus proposed an autonomous vehicle named Pop.Up that would operate on both the ground and in the air. And this year, the government of Dubai, in partnership with a Chinese firm, EHang, said it planned to begin operating an autonomous flying taxi by this July. Also, Uber is expected on Tuesday to detail its “vision for the future of Urban Air Mobility” at a conference in Dallas.

There is no shortage of skeptics happy to point out the roadblocks for these vehicles. There is already significant resistance to the idea of unmanned drones flying over urban areas, and flying cars could face substantial opposition, even if they can be quieted to automotive noise levels.

For these personal air vehicles to become a reality in the United States, the country would need a whole new air traffic control system.

“How is this going to work? I don’t want to be a Debbie Downer, but we can’t even take our cellphones on airplanes today because of fears about battery fires,” said Missy Cummings, the director of the Humans and Autonomy Laboratory at Duke University, who is researching personal air transport for NASA.

And don’t forget that flying cars will not be able to pull to the side of the road in an emergency, said John Leonard, a mechanical engineer at the Massachusetts Institute of Technology’s Computer Science and Artificial Intelligence Laboratory.

“Silicon Valley is full of very smart people, but they don’t always get the laws of physics,” he said. “Gravity is a formidable adversary.”

Correction: April 24, 2017
An earlier version of this article referred incorrectly to the timing of an offer in which consumers pay $100 to sign up for a $2,000 discount on the retail price of a Kitty Hawk Flyer. They can do so now; they do not have to wait until later this year. [“Source-nytimes”]
A Car Dream Flying longer No on Silicon Takes The Valley 2017-04-25
Loknath Das
to in With for and of on India The Launched at Samsung Launch A iPhone Android Galaxy More Apple Rs New Be 7 Price Google