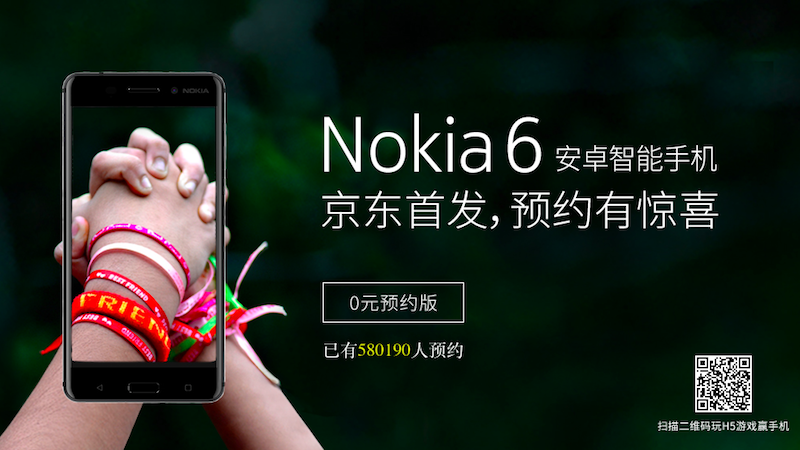 It can’t be said enough that the hype surrounding Nokia’s comeback was huge. And when HMD Global launched its first Nokia-branded Android smartphone, Nokia 6, one expected the phone would generate a lot of buzz. And it certainly has.

It was reported on Friday that the Nokia 6 had garnered as many as 250,000 registrations ahead of its first sale in just 24 hours. Now, that number has doubled to more than 500,000. The Nokia 6 will be sold via a flash sale on January 19 exclusively on JD.com in China.

Going by the rapid pace of registrations, its safe to say that Nokia fans are still out there and HMD Global has hit its first home run. At the time of writing this, total registrations crossed 580,000.
Despite the big numbers, the Nokia 6, on paper, does very little to impress seeing how competitive the smartphone market is today. Priced at CNY 1,699 (approximately Rs. 17,000), the Nokia 6 sports a 5.5-inch full-HD display with a 2.5D Gorilla Glass on top. The smartphone is powered by a Snapdragon 430 SoC coupled with 4GB of RAM and 64GB of internal storage. The dual-SIM Nokia 6 smartphone comes with a 3000mAh non-removable battery.

The Nokia 6 was perhaps a testing ground for HMD Global to see whether the world, or at least China, was ready for the Nokia brand’s return. Seeing the registration numbers, HMD Global will no doubt be satisfied right now as it gets ready to unveil some more Nokia Android phones on February 26 at MWC 2017.