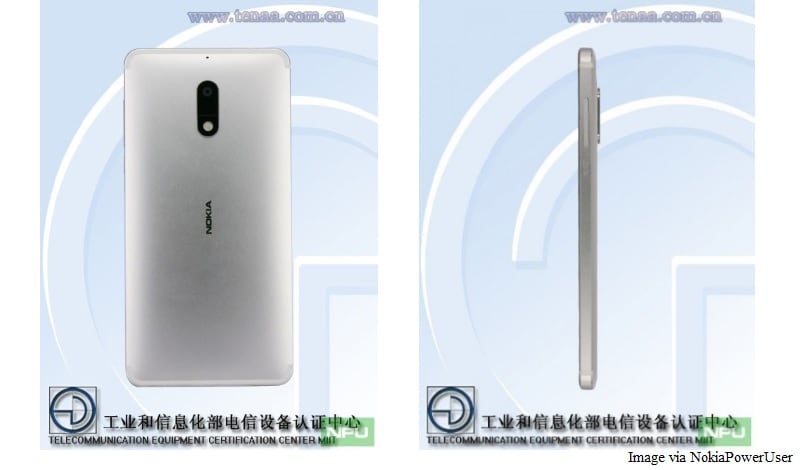 Nokia 6, the first Nokia Android phone by HMD Global, was launched on Sunday in China. While only the black colour variant of the smartphone was launched officially, a Nokia 6 Silver colour option has shown up on Chinese certification website TENAA. This suggests that nother Nokia 6 variant may be on the way, though whether this model will be headed to international markets is still under question.

Another notable point revealed by the Nokia 6 Silver variant’s TENAA listing is that the new Nokia Android phone carries the codename TA1000, which was earlier spotted passing the 3C certification, which was earlier touted as Nokia E1 smartphone, as per a report by NokiaPowerUser.

The Nokia 6 smartphone, which was launched exclusively for China, runs Android 7.0 Nougat. The phone packs a 5.5-inch full-HD display enveloped in 2.5D Gorilla Glass. Nokia 6 is powered by the Qualcomm Snapdragon 430 SoC alongside 4GB of RAM and 64GB of inbuilt storage. The dual-SIM smartphone houses a 3000mAh non-removable battery.

In terms of optics, the Nokia 6 smartphone features a 16-megapixel rear camera with dual-tone flash and phase detection auto focus. At the front, the Nokia 6 comes with an 8-megapixel f/2.0 camera for selfies. The smartphone also makes use Dolby Atmos technology and ‘dual amplifiers’ for louder sound. Nokia 6 features a fingerprint scanner that is embedded right into its home button.
The Nokia 6 has been priced at 1,699 CNY (roughly Rs. 16,750) and will be made available “in early 2017”.

Recent reports suggested that HMD Global might be working on its own text- and voice-based virtual assistant named ‘Viki’ for its Nokia Android phones. HMD Global recently filed for a trademark in the European Union for the name ‘Viki’, which appears to be a digital assistant from the description.

HMD Global has said that it has no plans of launching the smartphones for regions other than China but says “Nokia 6 marks the first step for the Nokia brand into Android smartphones with more to come in H1 2017.”