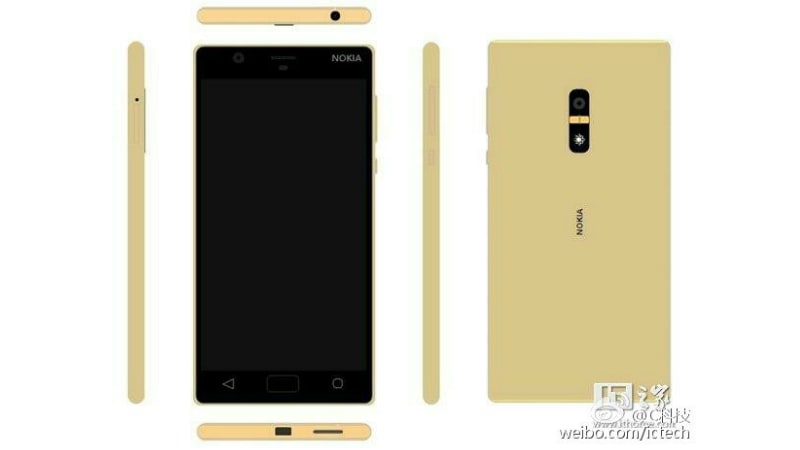 Nokia is tipped to return to the smartphone market in 2017, and the company is expected to unveil two to three devices in the upcoming year. One of them is the rumoured Nokia D1C, whose specification details have been cropping up recently. Now, fresh images have been leaked giving us a glimpse of what the smartphone looks like, and cementing the fact that indeed a Nokia mobile device is up for resurrection.

While a past leak suggested that the Nokia D1C may just be another Android tablet from the company, few other leaks point otherwise. Now, these fresh image renders from Weibo testify the latter theory, and even reveal design details on the upcoming Nokia smartphone. The Nokia D1C is expected to come in Gold, White, and Black colour variants. The Gold colour option is expected to sport a fingerprint scanner underneath the Home Button, while the others aren’t. There are capacitive buttons at the front (except for Gold, which sports a Home Button), and the volume and power buttons are housed on the right edge.

The smartphone has rounded metal edges, with the 3.5mm audio jack on top, and the USB port and microphone at the bottom edge. From the leaked images, the Nokia D1C appears to have a glass back casing, however, we recommend you to take this leak with a pinch of salt until further evidence.Past leaks suggest that the Nokia D1C is expected to sport a 2K resolution display, and be IP68 water and dust resistant. The smartphone is expected to sport a Snapdragon 820 or Snapdragon 430 processor paired with 3GB of RAM and 32GB of inbuilt storage. There’s a 13-megapixel rear camera and an 8-megapixel front camera expected on the smartphone as well.

Nokia earlier this year announced it was working with HMD Global to bring new Android-based products to the market. After the Nokia N1 (First Impressions)Tablet, the company is finally set to re-enter the smartphone space. Furthermore, Nokia has also confirmed that CEO Rajeev Suri will be speaking at MWC next year, and this rumoured smartphone is expected to be unveiled then.

[“source-ndtv”]
Android D1C Design Details Image Leak Nokia Renders; Smartphone 2016-11-07
srijita
to in With for and of on India The Launched at Samsung Launch A iPhone Android Galaxy More Apple New Rs Be 7 Price Google