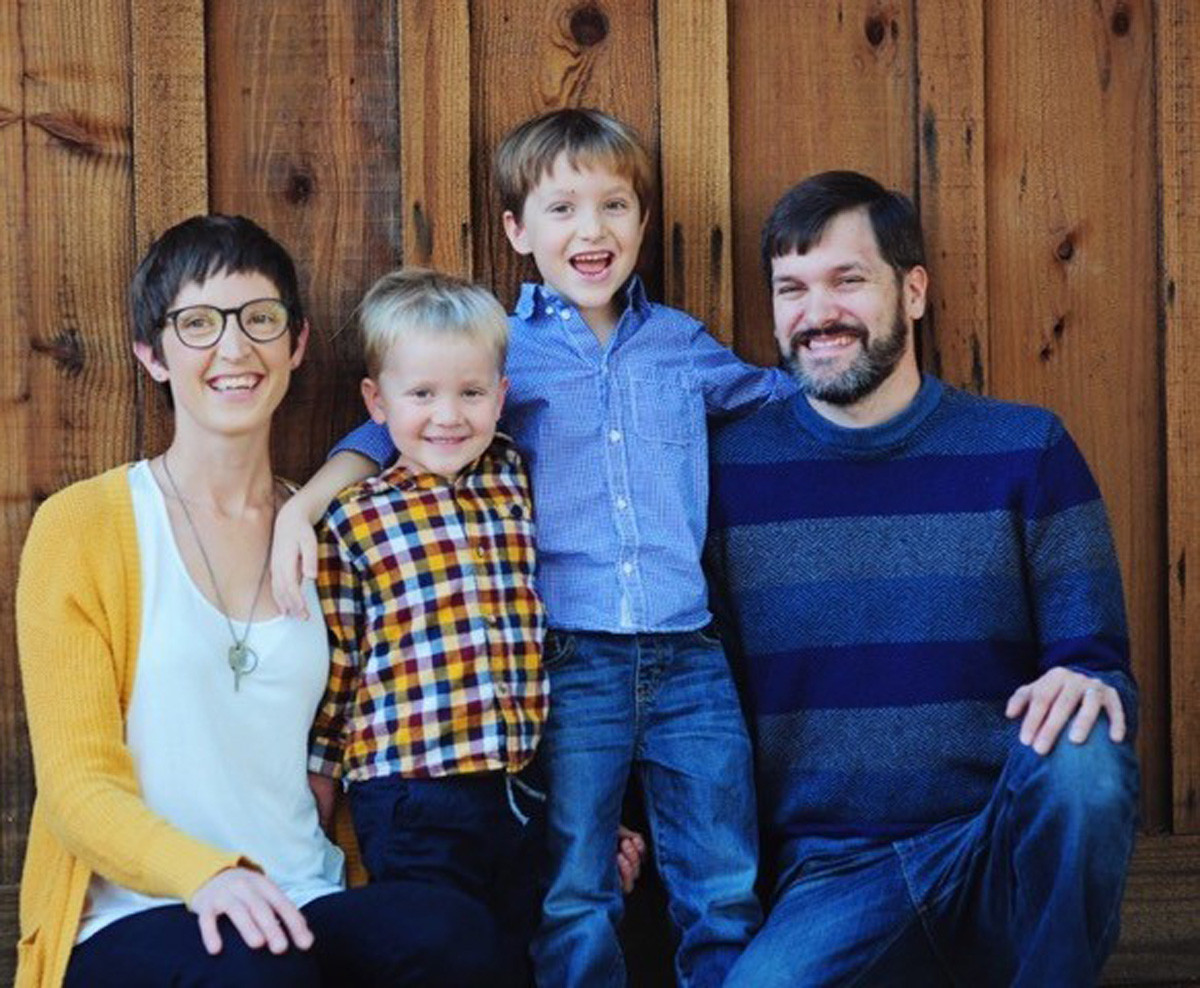 Like many people, Sarah and Adam Croxford had misconceptions about fostering infants and toddlers. They thought they needed to be perfect parents to their young sons Zed and Monty before taking on the challenges of fostering. And they were more than a bit intimidated by the prospect of interacting with the biological families of their foster children. As it turned out, their fears were unfounded.

What made the Poway residents look past their apprehensions and take the leap into fostering? Attending the information session at Angels Foster Family Network was a start.

In English accents that make everything they say sound just a bit more charming, the couple explains: “As soon as we started hearing the stories (from foster parents, biological parents and staff), we thought this makes sense,” said Adam as he holds two-month-old Baby E, rocking and cajoling him to sleep. Sarah added, “We always wanted a big family and, once we had the boys, we wanted to fill it with people who needed a home. Our original plan was to adopt, but now we see that fostering is where we need to be.”

The couple’s two concerns were addressed at Angels’ information session. “I’m just a normal parent who sometimes finds it hard to get dinner on the table at a reasonable hour,” explained Sarah. “You just have to be willing and have the capacity to love,” she added, explaining that she’s met many different types of foster. Adam agreed, saying “Some parents are highly structured, some people fly by the seat of their pants, some are people of faith, others aren’t, but the common thread is a willingness.”

The couple was also concerned about how they would interact with biological parents. “We saw them as a necessary part of the system, but not something we were looking forward to. In reality, it has been a privilege to get to know them and watch them take the steps they need (to regain custody of their children),” said Sarah. “None are bad people, and they have all given us a richer outlook on life. I feel like I’ve become a better person.” Adam added that he was afraid the parents would be confrontational, even violent. “It was awful of me, and completely unfounded. They didn’t see us as the enemy but treated us as partners, and I was like: This is not the image I had going in.”

Baby E is the family’s third placement through Angels Foster Family Network. All have been boys, which makes things easier since the Croxfords have clothes and toys for baby boys. Angels often offers clothing and supplies for foster parents, but the Croxfords are happy to add another boy to their cozy fraternity house, complete with a full-size Indian teepee in the living room.

Saying goodbye to their Angels placements is always tough, but the Croxfords maintain a positive attitude because their reunifications have been positive. “We feel they are going into situations that are good for them and that helps,” said Sarah. They feel proud of the biological parents for doing the work they need and have maintained relationships with families after reunification.

Still, it’s tough. “I know it’s going to hurt me right now, but I can carry that pain,” Sarah said. Adam added, “We’re adults, so that’s pain we can take. It’s like we can take the hit for them.”

Their sons feel it too. Monty had just watched the Paddington movie and there was a scene where the toy bear was alone at the train station in the rain. “We had just taken a baby out of state to his new home and Monty struggled to understand that we hadn’t left the baby alone like Paddington,” explained Sarah. Taking in another child helped. “Seeing the cycle repeat helped the boys understand that this is our job. We take in babies, take care of them, and return them to their biological families,” she said. “It has really benefited them because they learn a lot about life, society and their responsibility in it.”