Samsung Galaxy A 2017 Series Price Leaked Ahead of Launch 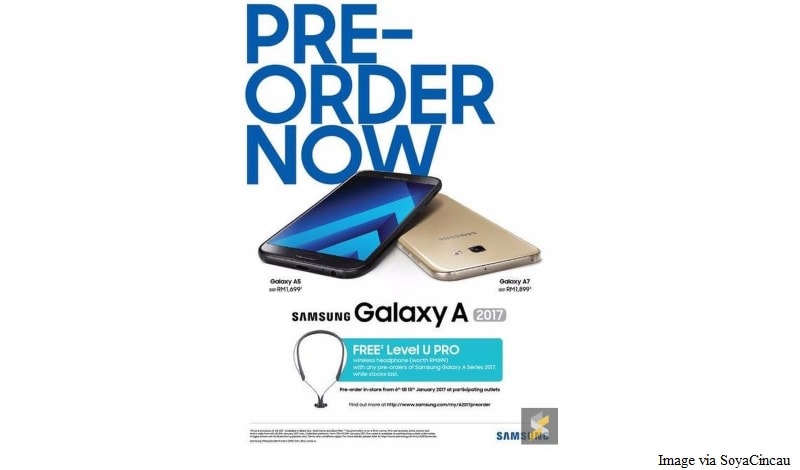 Samsung’s Galaxy A 2017 series of smartphones, which is set to be launched at an event in Malaysia on January 5, is also anticipated to be globally unveiled at the company’s January 4 event ahead of CES 2017. While there have been plenty of rumours and leaks in the recent past, the alleged pricing for the Galaxy A 2017 series has also been leaked online.

The alleged promotional images from Samsung Malaysia for the pre-order of Galaxy A 2017 series further reveal that users in Malaysia can pre-order the phones between January 6 and January 15, as spotted by SoyaCincau. However, the listed URL on the website seems to be not working at present. The leaked image further suggests that the South Korean manufacturer is also giving away Level U PRO wireless headset worth MYR 399 (roughly Rs. 6,000) with the pre-orders.

The Galaxy A7 (2017) has also been tipped to pack a 16-megapixel rear and front camera with f/1.9 aperture. A recent teaser from the company suggested that some phones from the series, if not all, will come with IP68 certification, making them highly resistant to dust and water.