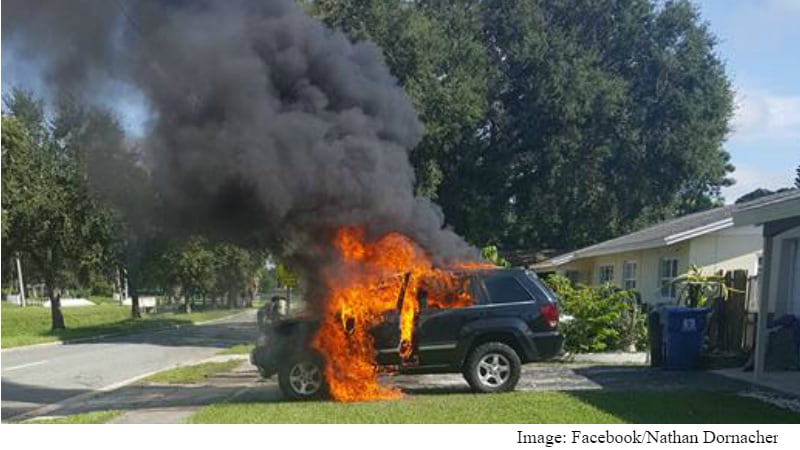 Exploding Samsung Galaxy Note 7 units are now being reported worldwide. After the incident in Australia, where a man was presented with a $1,400 bill because his handset exploded and caused damage to his hotel room, the most recent explosion cases are now coming in from the US. A Florida resident’s jeep was completely totalled after his Galaxy Note 7 was said to catch fire while on charge inside his car, and another incident was reported from South Carolina where a resident’s house was set on fire because his handset reportedly exploded while on charge.

Beginning with the jeep incident, victim Nathan Dornacher took to Facebook to relay the incident. He claims that he left his jeep on, outside his house, to keep the AC running and his charging point working. His family was about to head back out in a few minutes, so he didn’t shut the jeep off. When he got out of his house, he saw his jeep in flames. After the Fire Department finished their job, he shared images of his charred smartphone and damaged car.

Samsung said in a statement, “We are working with Mr. Dornacher to investigate his case and ensure we do everything we can for him.” The company also urged buyers to swap their handsets at the earliest.
Another incident was reported out of South Carolina in the US. Horry County resident Wesley Hartzog claims that he came home to find his garage had caught fire. He had plugged in his Samsung Galaxy Note 7 in the garage for charging, and had left to pick up his two daughters. When he got back, he found his garage in flames. The local fire department’s rescue investigators told WMBF that the fire originated near a wall outlet where Hartzog’s phone was charging. However, the exact cause of the fire is still unknown, and Hartzog and his family are forced to live in a hotel till the investigation ends.

Samsung hasn’t issued an official worldwide recall yet, but has announced an exchange policy for all the Galaxy Note 7 buyers. Even though sale has been suspended, because there is no official recall, third party retailers are still able to sell it.

As mentioned, an incident in Australia left the owner with a huge AUD 1,800 (roughly Rs. 91,600 or $1,400) damage bill. All of these incidents have forced the US FAA to issue a statement discouraging users to fly with the Galaxy Note 7. “In light of recent incidents and concerns raised by Samsung about its Galaxy Note 7 devices, the FAA strongly advices passengers to not turn on or charge their devices on board aircraft and not to stow them in any checked baggage.”

[“source-gadgets.ndtv”]
7 A and Explosions Fire Galaxy House in Jeep Note on Reportedly Samsung Set The US 2016-09-13
srijita
to in With for and of on India The Launched at Samsung Launch A iPhone Android Galaxy More Apple Rs New Be 7 Price Google