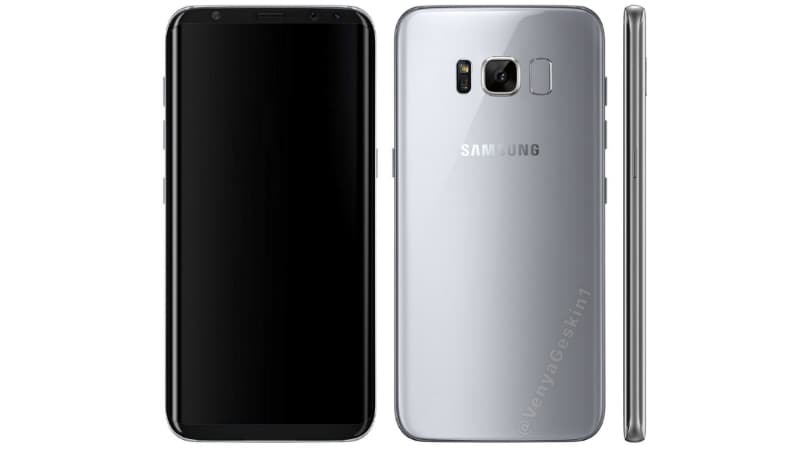 After the first live photo leak of the Samsung Galaxy S8, accompanied by its full specification reveal, there’s very little that is not known about the device. As the launch date draws near, leaks are picking up pace, and the latest one comes in the form of a concept render – the first one of the upcoming flagship.

The Galaxy S8 render has been made by Twitter user Benjamin Geskin who claims to make ‘realistic renders based on rumours and leaks’. It’s important to reiterate that this image is not the official one, and is just inspired from the hordes of leaks of the Samsung Galaxy S8. The image shows the hardware Bixby button on the right edge, and the volume and power buttons on the left edge. The back has the fingerprint scanner and the camera sensor sitting side by side, and the Samsung logo is at the back as well.

The front of Samsung Galaxy S8 is occupied mostly by the large dual-edge curved display in the render. There is no Home Button or navigation buttons seen at the bottom. The top chin of the display has sensors positioned slightly different than what was seen on the panels leaked earlier. The Galaxy S8 is tipped to come with an iris scanner in the front as well.

Past rumours indicate that the Samsung Galaxy S8 variants will run on the latest Snapdragon 835 processor (or a 10nm in-house processor depending on regions) paired with 4GB RAM, and offer 64GB of inbuilt storage that’s expandable via microSD card (up to 256GB). Galaxy S8’s front camera sensor will be at 8-megapixel, the rear camera at 12-megapixel, with both maintaining the f/1.7 aperture of their predecessors. The battery capacity will be 3000mAh and 3500mAh for the two variants, but will come with other optimisations to improve on overall usage time.
[“source-ndtv”]