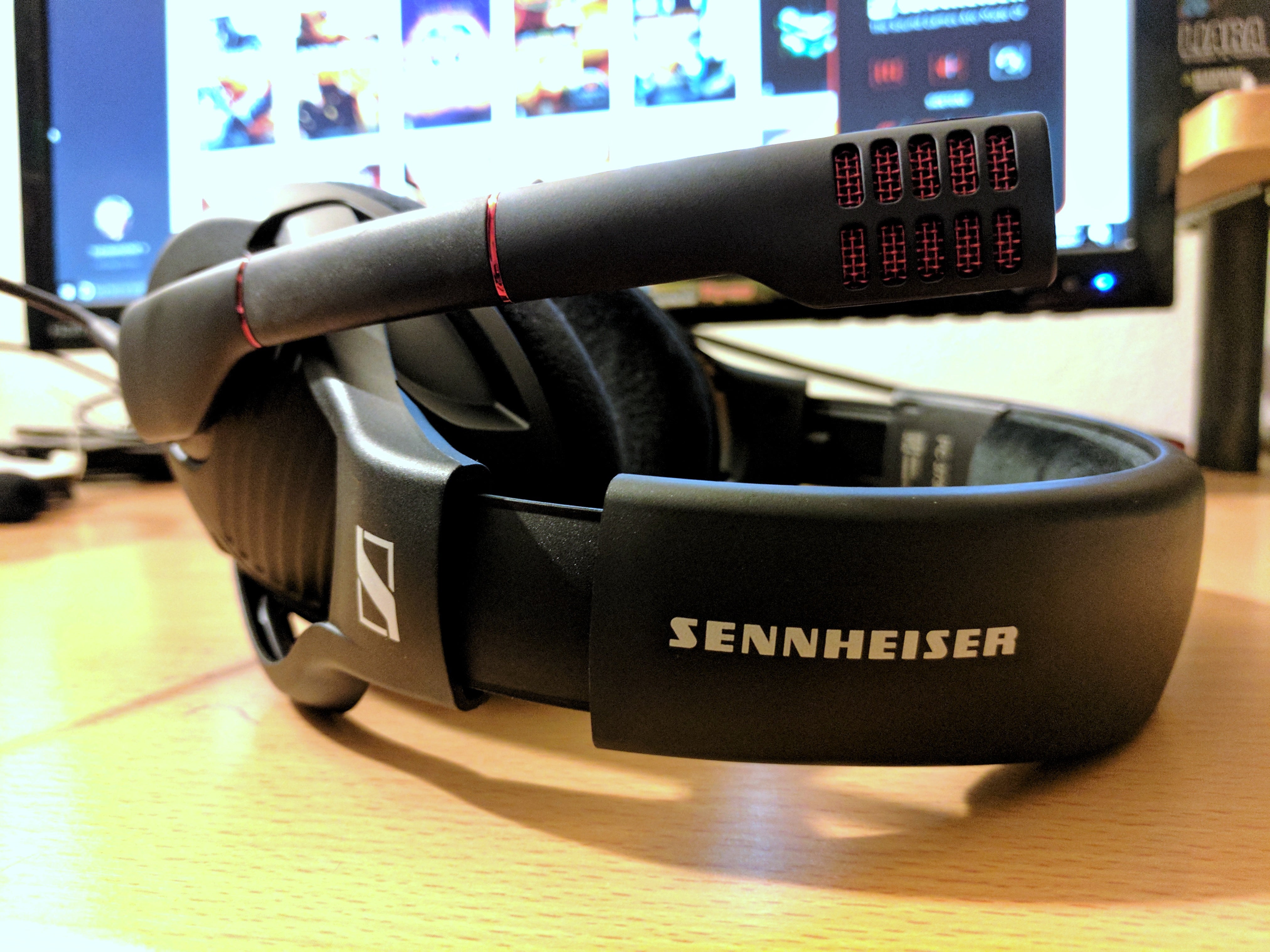 BY JUSTIN RUBIO Sennheiser is a name that needs no introduction in the world of audio, but PC gamers might not be aware of its premium gaming headsets for those who have high audio standards and deep pockets. According to Sennheiser, the PC 373D headphones (See it on Amazon) are “Hands down Sennheiser’s best headset for PC gaming,” and at a $250 MSRP they better be, as that’s about $100 more than similar high-end headsets from Razer, Logitech, et al. The PC 373D aims to deliver the entire package with superb audio quality, a noise-cancelling microphone, and a solid and comfortable build. This headset features the exact same design as the equally priced Game One headset, but outdoes it by featuring offering Dolby 7.1 surround sound and handy software control.

Sennheiser’s approach to the PC 373D’s design is pretty straightforward, as they’re comprised primarily of matte black plastic along with black velvet cushions and a few red accents on the microphone, making them somewhat understated in a market that is populated with products featuring angular designs, flashing lights, and bright colors. The headset’s subtle design allows it to look like it’s in its natural habitat whether it’s next to a gaming PC, in a music studio, or at a workstation. 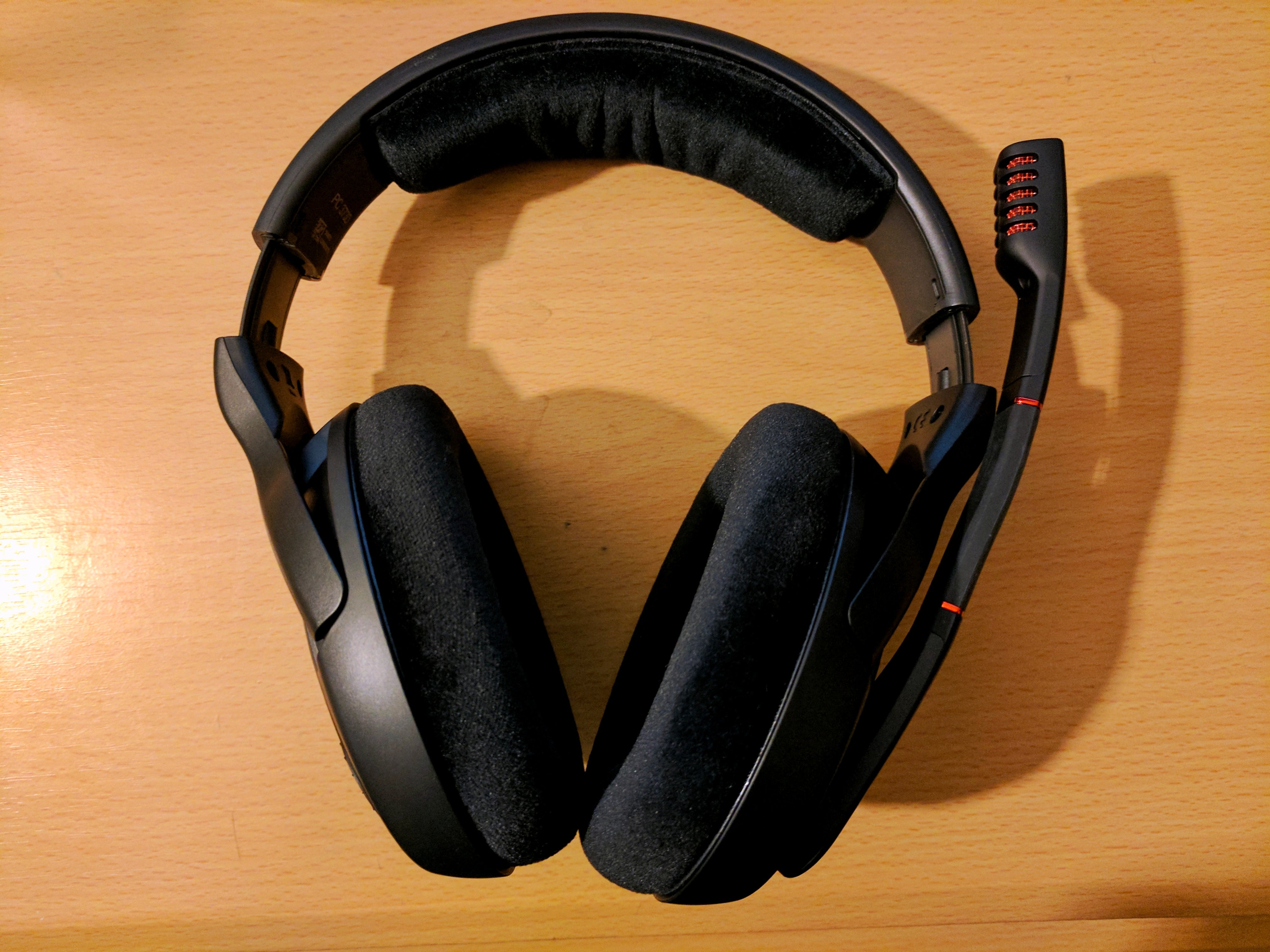 Aside from the horizontal slats on the earcups, the only added characteristics are a small volume knob that’s flush with the right cup and the non-removable boom mic on the left. The headset connects to a PC via USB, and in the path from the headset to the computer is a small dongle used to toggle the Dolby 7.1 surround sound mode. With the single-button dongle and earcup’s volume knob, most audio adjustments were easily made on the fly and muting the mic is as simple as swiveling the boom to an upright position. The 373D does offer additional audio controls though as Sennheiser provides a software program that gives quick access to EQ presets and a few extra features via a small pop-up window accessible through the Windows taskbar. The swiveling microphone features noise cancellation and a bendable tip.

Sennheiser’s simplistic approach to hardware design is also apparent with the 373D’s companion software. Instead of offering a dizzying array of different EQ presets, there are only four non-adjustable equalizer choices: Music, eSport, Games, and Off. The Music preset enhances bass and treble; eSport sets a treble-heavy EQ so that sound effects like gunshots don’t drown out incoming footsteps; the Game option most noticeably increases bass, or you can also choose to not use any of the presets. Also available through the same quick-access program are options to activate the microphone’s noise reduction feature, select the volume of mic monitoring, and toggle the surround sound through a minimalist menu design that allows speedy adjustments during gaming or viewing sessions. 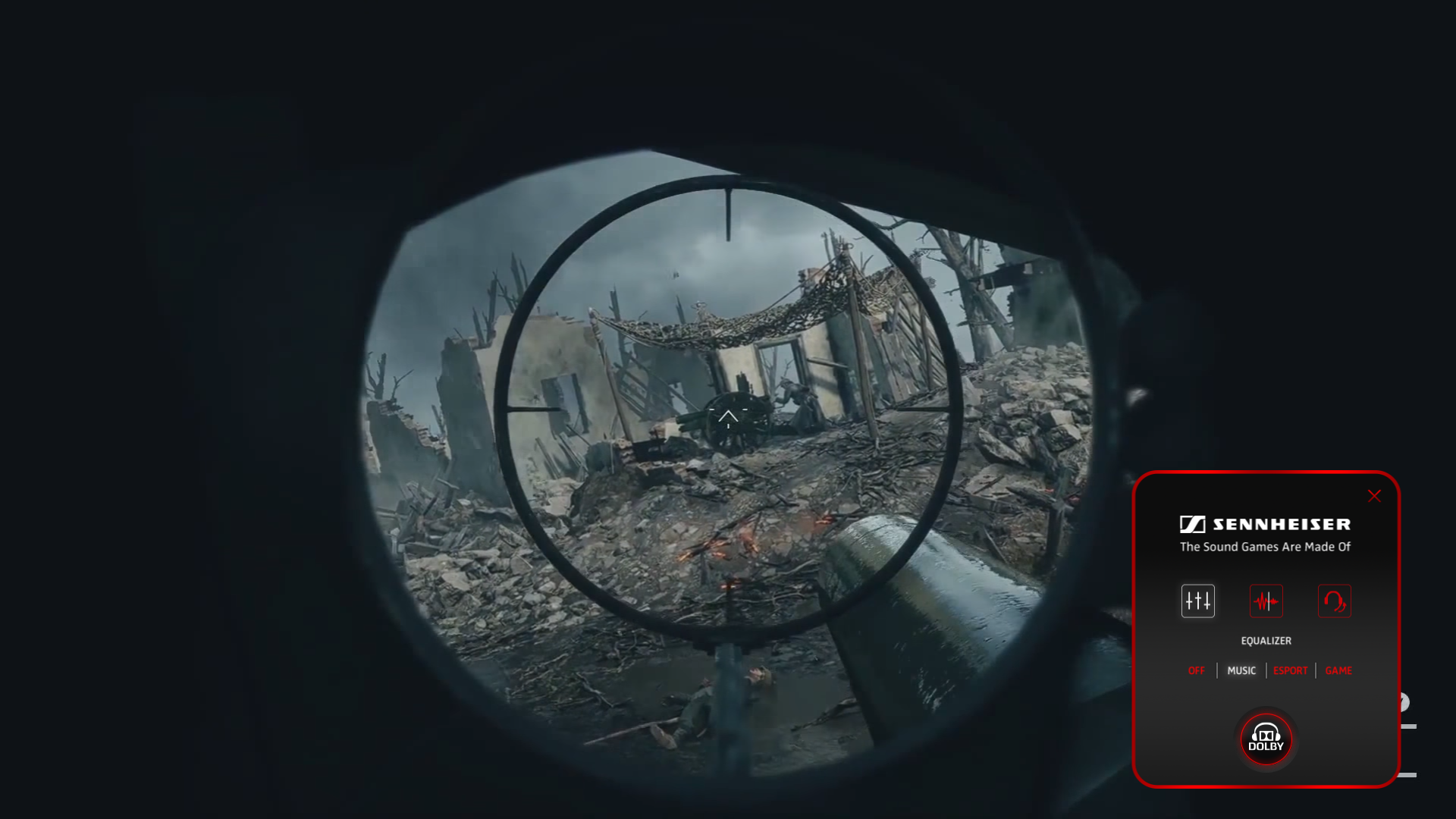 For gaming I naturally sampled the Game preset, and found it offered a nice balance of added bass while keeping treble at a bearable level. The sound of soldiers running around from all directions as airplanes flew overhead in Battlefield 1 came through loud and clear. With the 7.1 Dolby option activated the orchestra of warfare filled my earcups without any sign of distortion, even at higher volumes. Quieter moments that involved creeping behind enemy lines also highlighted the surround sound feature, as I was able to easily identify the direction in which chatty soldiers were standing watch so that I could avoid detection. Since the headphones use an open-back earcup design, airflow is improved for binge gaming comfort but sound is not confined to just the listener. At high volumes, music and games were heard from down the hallway in my house. While I enjoy the added depth of sound from open-back earcups, a natural flaw is that sound leaks at a much higher level than enclosed, closed-back alternatives. The design that makes music and video game effects sound more full was also a nuisance for anyone in my general vicinity. These definitely aren’t headphones to take to a coffee shop or office with coworkers nearby.

The Music option paired with surround sound turned off worked great with a number of music genres. The dynamic drivers produced bass that was heavy but not overpowering, vocals came through clearly, and instrumentation sounded well-balanced when listening to everything from old school hip hop and rock to EDM and musical soundtracks. The lows were more prominent on the 373D than the Turtle Beach Elite Pro (review coming soon) and sound was delivered with more clarity than Turtle Beach’s Ear Force XP510. Sennheiser has a reputation for making quality headphones for music, and it’s pretty clear why after using the PC 373D. Although I do not take part in competitive-level eSports, I found that particular preset and its focus on treble while completely ditching bass rather annoying. The default audio profile shouldn’t be overlooked, either, as it still pushes out a versatile EQ that can be used in a variety of circumstances. Sadly there’s no way to make any any adjustments to the default EQ, which certainly keeps things simple but is a rather disappointing “feature” on a set of $250 headphones. 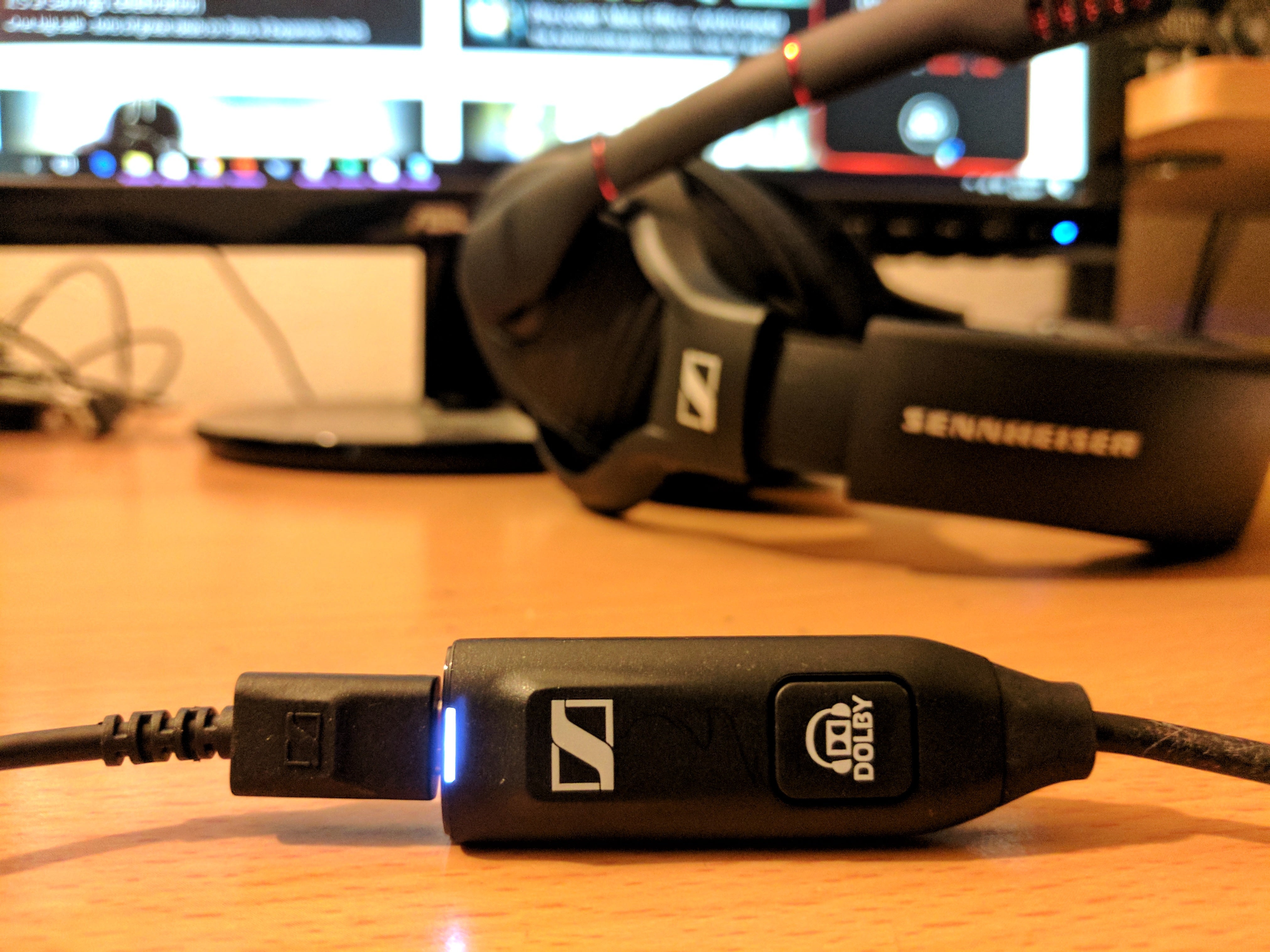 The swiveling microphone was better than those found on other gaming headphones I’ve used, although isn’t at the level that I would want to use for something like recording a podcast. The mic was able to pick up more bass than Turtle Beach’s Elite Pro headset and my voice came in clearer than when using the Razer Tiamat 7.1 or Kraken Pro. Those on the other side of phone calls and gaming sessions had no problem hearing me loud and clear, helped in part by the microphone’s noise reduction capabilities. 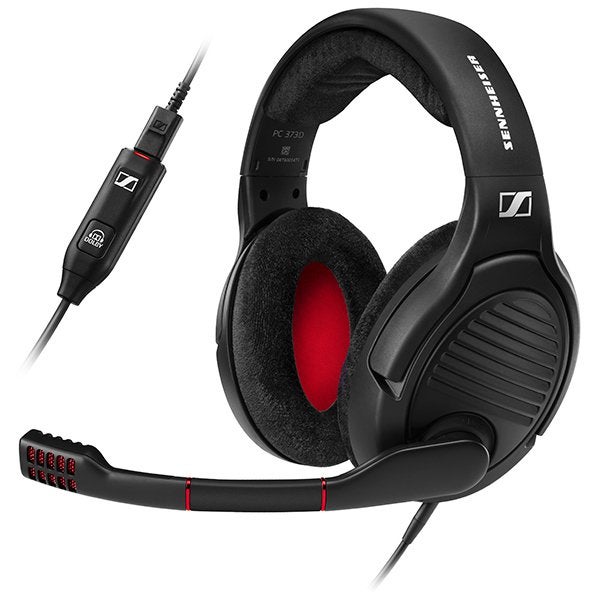 The 373D’s XXL earcup cushions provided more than enough room around my ears and felt comfortable and cool even after hours of use, as did the velvet padding along the underside of the headband. A low-profile design and lack of heavier materials such as metal keep the unit lightweight, also reducing fatigue from use. The use of plastic may be a concern years down the line when it can begin to loosen up a bit, but out of the box the earcups and headband were sturdy enough to sit securely around my head and stayed in place without needing to readjust at any time. If it weren’t for the attached microphone and 373D’s USB-only connectivity, I would be just as inclined to wear the headphones out in public while listening to music on my smartphone as I am in the privacy of my home office, especially with its discreet design and comfortable, breathable build. It’s a shame Sennheiser doesn’t include a USB-to-3.5mm jack adapter, but it does offer adapters as accessories for use with consoles, though you won’t get the 7.1 surround sound with anything other than a PC.

Sennheiser’s PC 373D has plenty to offer: quality audio, a comfortable build, and a clean, understated design. Even with its relatively high price tag, it doesn’t take much time with them to understand why as they are top-notch through and through. While I would appreciate some manual control over the headset’s equalizer, Sennheiser’s fine-tuned sound profiles provide balanced audio that mostly makes extra customization options unnecessary. Still, at this price it’s surprising that such a basic feature wasn’t included. I also wish the microphone could be removed and that the headphones could connect with a 3.5mm jack out of the box so I could use them with devices other than my computer—something that is possible with the company’s similarly-priced Game series headsets. Still they sound superb and are bathrobe-level comfortable.

The PC 373D sits in the premium category of gaming headphones but not only because of its price. The execution of the entire product, from design to performance, is well worth every penny. It may not have absolutely everything I’d want from headphones at this price, but it’s close.

[“Source-ndtv”]
373D Gaming Headset: PC Review SENNHEISER 2017-05-25
Loknath Das
to in With for and of on India The Launched at Samsung Launch A iPhone Android Galaxy More Apple Rs New Be 7 Price Google