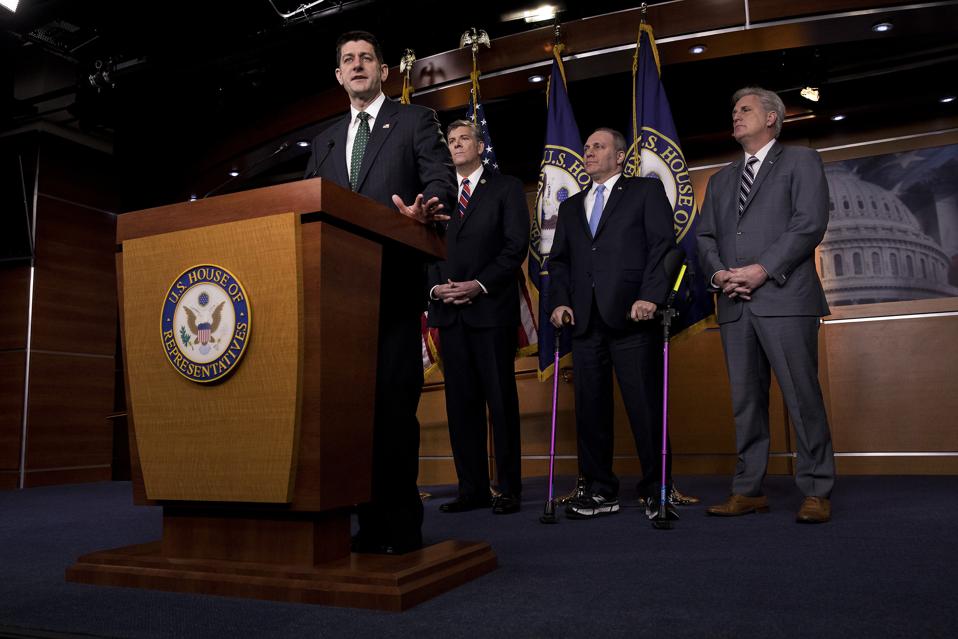 House Republicans appear to have largely given into their Senate colleagues on a tax cut bill, news reports suggest. (Photo by Aaron P. Bernstein/Bloomberg)

You might have thought that when it comes to the competing tax cut bills that have been duking it out behind closed doors at the Capitol, advocates for small business would feel like they’re living in the best of both worlds. After all, whatever House and Senate Republicans decided, owners of pass-through companies were almost certain to get a tax cut. (Alabama Democrat Doug Jones’s election to the Senate on Tuesday seems unlikely, for the moment, to derail the legislation.) But in fact, inquiries to some of the leading small-business lobbying groups revealed less enthusiasm and more ambivalence — and in some cases even anxiety.

Most organizations prefer the Senate bill, even though the House’s carefully targeted tax break may generate more economic growth. “Both bills would bring long overdue relief to hardworking American taxpayers,” said Alfredo Ortiz, president and CEO of the Job Creators Network. “However, the significant small business tax deduction of 23 percent in the Senate bill would dramatically help job creators.”

The sentiment appears to have carried the day. On Wednesday morning, Roll Call reported that House and Senate negotiators had accepted the Senate provision as the basic framework for a pass-through tax cut — though they settled on a 20 percent deduction for pass-through businesses, rather than the 23 percent contemplated by the Senate. But according to the report, “discussions are still fluid.”

To be sure, some groups would have been thrilled either way. The National Retail Federation “would be happy with either version on pass throughs,” said spokesman Craig Shearman. “There is a lot the House and Senate need to negotiate to reconcile the two bills, and we recognize that will be hard. So on this particular issue, it’s fair to say that we can support whichever result helps move the total package forward.”

The National Small Business Association took the opposite perspective, but came out in the same place. “While neither bill is perfect, the Senate’s version gets us closer to our top priority on the pass-through piece, which is parity,” says spokeswoman Molly Day. “The House’s 70/30 split is definitely problematic” — Day is referring to the formula by which the House bill distinguishes the share of business profit coming from wages, which doesn’t get a break, from the share deemed a return on invested capital, which does — “as is the temporary nature of both provisions.” The National Association of Manufacturers told legislators that both bills “present challenges” for its members, but at least the Senate version is less complex.

Jerry Howard, CEO of the National Association of Homebuilders, said that his organization, which opposed many provisions in the House bill besides the pass-through cut, was planning to spend $1 million to see that the Senate carries the day. “It’s by far our biggest advocacy expense.”

But several organizations remain unsatisfied with the Senate provision. Matt Heller, a spokesman for the International Franchise Association, said his organization would support the Senate pass-through deduction if it didn’t place a limit on the deduction equal to half of the company’s total wage expense, which is meant to encourage hiring. (The limitation only applies to owners with taxable income above $500,000 for married couples, or $250,000 for individuals.) “We’d like to see the 50 percent wage cap eliminated for franchisors, because they’re not adding payroll at a 1 to 1 ratio as they grow,” Heller said. “They’re generating franchise fees and revenues, but the way they’ve structured deduction, they can’t take full of advantage. It’s an unintended consequence that punishes franchise business growth.” And he argued that a limitation barring many service businesses from taking the deduction (which in the Senate bill applies only to the wealthiest taxpayers) would exclude many productive companies.

Others lodged broader complaints. Construction industry trade groups say that because the Senate failed to repeal the alternative minimum tax for individuals, many builders would not see any benefit from the pass-through deduction. And the NSBA remains concerned about the overall structure of the Republicans’ efforts. “Another key priority for us on overall tax reform is simplification, which neither bill really does much to address,” says the NSBA’s Day, “and neither does much in terms of debt reduction, another priority of ours.”

The National Federation of Independent Business, arguably the best-known small-business group, didn’t respond to my requests for comment. It has supported both pass-through provisions.

According to late-breaking news reports, negotiators from the House and Senate have reached a compromise on the total tax bill, and though full details haven’t been released, hope to approve it Wednesday afternoon. President Trump hopes to sign the bill next week.