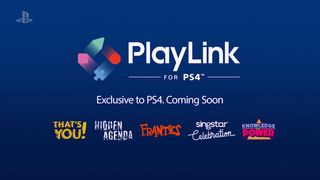 Update: We’ve had a chance to try four of the five games Sony is releasing for PlayLink out for ourselves on the show-floor at this year’s show. Check out our impressions of That’s You!, Hidden Agenda, Frantics, and Knowledge is Power down below.

At its E3 conference this year, Sony has announced a new collection of smartphone-controlled games designed to entertain the whole family, including those who might not usually play games.

Under the umbrella PlayLink, these games are played on the PlayStation 4 console, but controlled via an iOS or Android smartphone rather than the DualShock controller. The concept is fairly similar to Jackbox Party games, which allows several players to connect over their smartphones and play short but addictive party games together.

The lineup of games at the moment is fairly small but includes the quiz games That’s You!, and Knowledge is Power. There’s also a Heavy Rain style adventure game called Hidden Agenda.

Meanwhile, Frantics is a multiplayer platform game where you tilt your phone to control a character on screen, and there’s also a new Singstar title called Singstar Celebration.

We had a chance to try out four of the five games on the show floor.

First up was Hidden Agenda. Along with three other players, we played a mission as a cop investigating a missing person. Initially the demo started by offering us simple choices of how to proceed in the mission which we would each vote on using our phones.

However, before long one player had been secretly shown a ‘hidden agenda’ on their phone screen, which meant that they were trying to influence the story in a certain direction without giving this away to the rest of the group.

Although the game story’s mature themes seemed a little at odds with the group of us using our phones to vote, Hidden Agenda feels like it has a lot of potential for sabotage and intrigue.

Next up was Frantics, a game where you tilt your phone to control a character on screen as they compete with three other players. While the games were fun overall, we didn’t feel as though the control scheme particularly suited the smartphone controller, and there were points where we wished we were using a standard PS4 controller.

Knowledge is Power was a particularly strong game in the lineup. At first glance it appeared to be a fairly simple quiz game were everyone used their phones to pick between four available answers to each question, but after each round players would gain special abilities to disrupt their opponents.

Finally, That’s You! was a quiz game where players were asked subjective questions about each other. Points were gained not for getting the answers right, but for guessing the same answer as everyone else. One standout question was simply, “Who is most likely to taser themself while attempting an arrest?” We could imagine this game being especially fun with friends.

It’s definitely an interesting mobile approach from PlayStation (one that actually seems like something Nintendo should have considered rather than its IP-driven standalone titles).

Many of the games really benefitted from giving each player their own screen, and being able to play with phones rather than controllers should help larger groups play, rather than needing to rely on people having a large number of controllers.

That’s You! will be the first game to be released free to all PlayStation Plus members on July 4. You can see the trailer for yourself below:

'Together' and Brings Console? Gaming Mobile New PlayLink Sony's 2017-06-15
Loknath Das
to in With for and of on India The Launched at Samsung Launch A iPhone Android Galaxy More Apple New Rs Be 7 Price Google