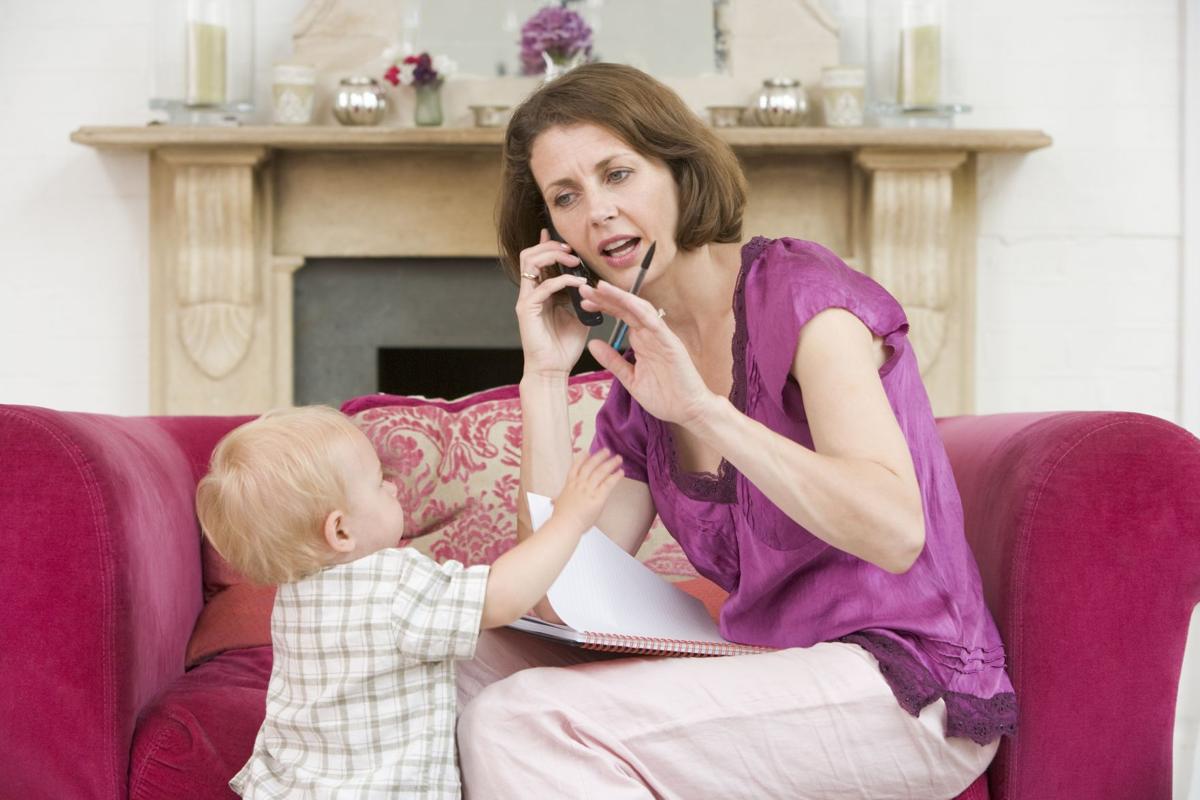 When you ignore – and especially when you don’t even hear — your child’s repeated requests for attention, that’s distracted parenting.

Often, you’re distracted because you’re focused on something else, such as your mobile device, a TV show or someone else. Your child, who may have patiently attempted to get your attention a few times, may simply give up or may misbehave in an attempt to shift your focus.

Either way, that child doesn’t feel that his or her needs are important enough to warrant your attention, and that can be dangerous message over time.

Nearly all parents have been distracted at one time or another, and that differs markedly from neglectful parenting, which is parenting characterized by a complete lack of interest or involvement in a child’s life. Neglectful parents never respond to their children’s needs and are often indifferent to them. That’s a far more serious issue than distracted parenting.

Distracted parenting is when you’re playing Words With Friends, for instance, and you haven’t heard your son’s increasingly whining pleas for help with his math homework. You had promised to help him if he put away his Legos and helped his sister wash her hands after dinner. And he did those things, but now you’re unavailable.

As a result of his frustration, he knocks over his milk or kicks over the dog’s water dish, causing enough of a commotion to divert your attention from your cell phone.

How you respond is important. Your son wasn’t able to get your attention by asking for your help, so he resorted to naughty behavior. Do you immediately yell at him? Belittle him for interrupting you? Punish him by sending him to his room for a time out?

Or, realizing he was acting out because he wanted your attention, you turn to him and say, “Let’s clean this up and figure out your math homework?”

Psychologist and author of the recently published book Growing Friendships: A Kids’ Guide to Making and Keeping Friends, Eileen Kennedy-Moore, Ph,D., said, “What’s important is responsiveness: When our kids are trying to get our attention, how do we react? Do we notice when they’re being kind, helpful or creative or only when they’re misbehaving? Do we have enough relaxed downtime with our kids so they can talk with us when they need us?”

Many parents have developed strategies and habits that help them stay focused on, present for, and responsive to their kids.

Blaine Flamig of Ashland and his wife Shannon have four children with two still at home (Rubi, 10 and, for the summer, Ella, 20).

Flamig said, “We don’t allow phones or other devices at the supper table. With rare exceptions, we don’t have the TV on during supper, either. We spend that time talking and getting caught up, and it’s not unusual for us to play a game of Name The Best And Worst Thing About Your Day. We go around the table, and each person gets to answer.”

Jennie Schlueter, mother of two (Micah, 13 and Tyler, 11), agrees that family time, especially time around the dinner table, is special time, and there are no electronic devices allowed. Dinner time with her family growing up was a big deal, and she and her husband have carried on that tradition with their children.

“When we’re sitting at the table, there’s no TV, just the radio, which I usually tune to something festive or jazzy,” says Schlueter. “Maybe once a week, we’ll eat in the living room and watch a show like the Amazing Race that we like as a family.”

Schlueter said she’s firm about screen time, and her sons will confirm that.

“I don’t text while I’m driving, and if we’re at a restaurant or waiting somewhere, I make a point to engage my sons in conversation instead of looking at my phone or allowing them to,” Schlueter said. “I’m aware of how others around us spend their time, and it makes me crazy to see how much time everyone spends staring at their phones. I really try not to be a zombie or let my kids be, either.”

In addition to not letting cell phones interfere with family time at dinner, Flamig and Schlueter make an effort to be physically present at their children’s sporting events and school performances, and phones are strictly off limits on those occasions, too.

“Unless I’m taking a photo, I put the phone away at the park, at their sports games, and generally everywhere common sense dictates,” Flamig said. “I do everything possible to not miss their events. They want me there, and I want to be there, too. I remember how much better and more confident I felt about myself when I saw my parents sitting in the stands, and I want to give them the same boost and sense of support.”

Schlueter knows that parents are the first source of information in their children’s lives, in addition to showing them by example how to relate to the world.

“My sons learn from me how to interact with others, and I want them know that I’ll always love them and be there for them,” Schlueter said. “I want them to be attentive husbands and fathers someday who pay attention to how others are feeling and take care to do what they can to be kind and present in their own lives. And I get a lot of joy myself out of knowing I’m present in their lives because I have fun hanging out with them.”

Research has shown that in addition to putting away electronic devices and responding to your kids, they also need attention during times of reunion.

“The times we get together with our kids after being apart for the day can often be a time of special intimacy between parents and children,” Kennedy-Moore said. “For some kids, bedtime can also be a good time to connect. It makes sense to put extra effort into being present with our kids during these routine, but important times.”

Present parenting is not just paying attention to your kids when they want to talk to you; it’s also playing games, going for bike rides or otherwise engaging in an activity with them. That’s not to say they need your attention or involvement 24/7. They do need time on their own, with their friends, or with any siblings, all of which is critical to learning about the world themselves.

Stowing her cell phone at the door when she gets home from work is one of Schlueter’s personal rules, and she rarely checks it until after her sons go to bed. When her boys don’t have baseball practice or music lessons, they all walk the dog together, go rollerblading around the neighborhood, jump on the trampoline, or prepare dinner.

“I consider being present to mean giving my full attention to a task, whether that’s a conversation I’m having with one of my kids or making an effort to be there every night when it’s time to tuck them in,” Schlueter said. “Even at their ages, we say prayers at bedtime, and I often sing a song. I believe this steady presence in their lives is crucial to an overall sense of their feeling loved. It has provided stability and gives us shared time together every night when they can talk to me if they need to.”

Making an effort to be present and engaged in your children’s lives sends a message that you care. Parenting is tough, and everyone makes mistakes now and then. Overall, though, your kids will remember if you were a present parent and were there for them most of the time.

“No parent is ever going to be 100 percent responsive, but we can try to be more aware of when our children are looking for our attention,” Kennedy-Moore said. “We can try to turn toward our kids in kind ways more often than away.”