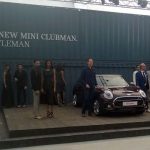 The new generation MINI Clubman has been launched in India at Rs 37.9 lakh (ex-showroom, Delhi). It is the second product to be launched by the carmaker in India this year, with first one being the MINI Cooper S Convertible. The Clubman is currently the longest model in the British carmaker’s line-up and in its second generation. It was early ... END_OF_DOCUMENT_TOKEN_TO_BE_REPLACED