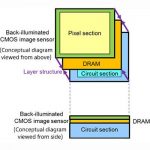 Sony on Tuesday announced its first 3-layer stacked CMOS image sensor with DRAM for smartphones. The company is promoting that the new CMOS sensor for smartphones will be the first in the industry to include a DRAM layer. Sony adds that apart from the DRAM layer added to the conventional 2-layer stacked CMOS image sensor, a layer of back-illuminated structure ... END_OF_DOCUMENT_TOKEN_TO_BE_REPLACED