HIGHLIGHTS Nokia 2 to receive Android 8.1 Oreo update HMD Global CPO confirmed the development Nokia 2 likely to get some Android Go features alongside new Android Oreo After bringing the latest Android experience to the flagship Nokia 8, HMD Global is now set to directly provide Android 8.1 Oreo to Nokia 2. The handset was launched in October with Android 7.1 Nougat. It comes with an ... END_OF_DOCUMENT_TOKEN_TO_BE_REPLACED 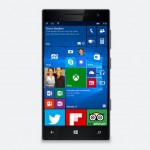 After a series of delays, Windows 10 Mobile is finally ready for public exposure. Microsoft has announced the release of Windows 10 Mobile for a range of Lumia and other smartphones running Windows Phone 8.1. On Thursday, Microsoft announced it is making the latest iteration of its mobile operating system available for 18 smartphones. The smartphones include the Lumia 1520, ... END_OF_DOCUMENT_TOKEN_TO_BE_REPLACED