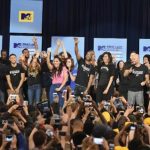 The summer blockbuster season has officially kicked off with the release of Guardians of the Galaxy Vol 2. and it is booming. After one week of non-domestic box office action and it’s first few days in U.S. theaters, the Marvel sequel has already become the sixth biggest film of the year globally with a take of $427.6 million. It’s highly ... END_OF_DOCUMENT_TOKEN_TO_BE_REPLACED