March 1, 2016 Comments Off on Uber Faces Potential Big Fine and Ban for Bosses in France 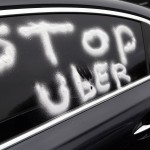 Uber risks millions of euros in damages and fines and having two top executives banned from running the ride-hailing company in France as a trial wrapped up Thursday in a Paris court. The San Francisco-based company is in trouble in France over its now-suspended low-cost UberPop service, which connected clients to non-professional drivers, infuriated French taxi drivers and prompted the ... END_OF_DOCUMENT_TOKEN_TO_BE_REPLACED

Since returning to Twitter Inc in July, Chief Executive, Jack Dorsey has made a handful of dramatic changes to the micro-blogging service – and promised more. But the new features so far have been unsuccessful at doing the one thing Wall Street wants most: getting more people to use the service. Analysts say Twitter’s stock price, which has reached record ... END_OF_DOCUMENT_TOKEN_TO_BE_REPLACED