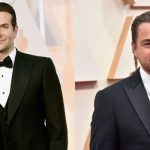 Bradley Cooper, star of The Hangover, The Silver Linings Playbook, A Star is Born and more recently admitted that he had some insecure feelings about taking on his role in Nightmare Alley. Now, Nightmare Alley is the Guillermo Del Toro film that was recently released starring Cooper but back when the film was first announced it had a different actor attached. Deadline first reported in 2019 that Leonardo ... END_OF_DOCUMENT_TOKEN_TO_BE_REPLACED