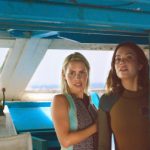 48 Meters Down, the sequel to 47 Meters Down will be distributed globally by Entertainment Studios Motion Pictures, the theatrical distribution division of Byron Allen’s Entertainment Studios. ESMP will push out the  suspense thriller from The Fyzz Facility worldwide. The indie 47 Meters Down, which starred Mandy Moore and Claire Holt, was a shark thriller that grossed over $44.3M domestically and over $10M in foreign territories for a worldwide grab of $54.8M on ... END_OF_DOCUMENT_TOKEN_TO_BE_REPLACED