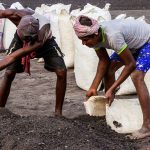 According to the PLFS, 12.7% workers in rural areas and 29.9% in urban areas put in more than 60 hours a week during the April-June quarter of 2018, while the majority of rural workers put in 48 to 60 hours.(Shutterstock) AddThis Sharing Buttons Twelve per cent of rural workers and nearly one in three in urban areas across the country ... END_OF_DOCUMENT_TOKEN_TO_BE_REPLACED