November 27, 2016 Comments Off on Xiaomi Mi 5c Leaked in Images, Detailing Design Ahead of Launch 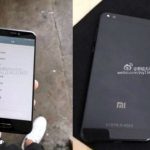 Xiaomi Meri aka Mi 5c has been leaked on several occasions, and is tipped to be the first smartphone from the Chinese smartphone maker to sport an in-house processor. Now, in fresh leaks, the smartphone has been snapped roaming in the wild before its official release, hinting at its imminent arrival. The live images of the Xiaomi Mi 5c were ... END_OF_DOCUMENT_TOKEN_TO_BE_REPLACED