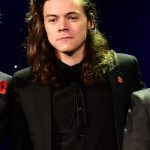 Harry Styles showcased his new music on the US TV show Saturday Night Live 16 April 2017 10:15AM Harry Styles poked fun at his new solo career as he impersonated Mick Jagger on Saturday Night Live. The One Direction star mimicked the Rolling Stone frontman for a sketch on the US comedy show, where he also showcased some of his ... END_OF_DOCUMENT_TOKEN_TO_BE_REPLACED