The British police caught a 17-year old in possession of more than GBP 2 million (roughly Rs. 21.61 crores) worth in Bitcoin (BTC) after the teen was intercepted for what the cybercrime unit of the police claim to be a “sophisticated cyber fraud.” The teenager created a copycat website of a popular gift voucher site named Love2Shop and advertised it ... END_OF_DOCUMENT_TOKEN_TO_BE_REPLACED

May 9, 2020 Comments Off on Job losses for 20.5 million Americans herald more pain to come 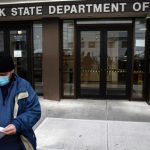 The U.S. unemployment rate in April could hit 15% — a number not seen since the end of the Great Depression. (AP Photo) It took just one month for the labor market in the world’s largest economy to capsize. It will take longer for the damage to be fully realized. In the harshest downturn for American workers in history, employers ... END_OF_DOCUMENT_TOKEN_TO_BE_REPLACED

I spend about $100,000 every week marketing my company to businesses nationwide. Spending that much per week on marketing may strike many business owners as excessive. And for some businesses, it is. Obviously, I wasn’t spending $100,000 on marketing when I first started out in 1998. I didn’t have much working capital back then (just a $5,000 credit card, if ... END_OF_DOCUMENT_TOKEN_TO_BE_REPLACED

Google agreed to pay $11 million to end a lawsuit accusing the internet giant of discriminating against older job applicants, a deal that amounts to an average payout of more than $35,000 for 227 people who joined the class action. The settlement also calls for the Alphabet Inc. unit to train employees and managers about age bias, to create a committee ... END_OF_DOCUMENT_TOKEN_TO_BE_REPLACED

Google’s paid music services have eclipsed 15 million subscribers, according to two people familiar with the numbers, a milestone for a company that has struggled to build subscription media businesses. The figure includes subscribers to two services — YouTube Music and Google Play Music, an older service that is being folded into YouTube Music — said the people, who asked not to be identified ... END_OF_DOCUMENT_TOKEN_TO_BE_REPLACED

Google has been fined more than $56 million over its advertising in Europe. France’s data privacy watchdog CNIL announced in a statement Monday that it was imposing a record sanction of 50 million euros on the U.S. tech giant due to “lack of transparency, unsatisfactory information and lack of valid consent for the personalization of advertisement.” An investigation into complaints filed against Google ... END_OF_DOCUMENT_TOKEN_TO_BE_REPLACED

HIGHLIGHTS PUBG Mobile now has 3.1 million US players Out of those, 1.7 million are on Android PUBG Mobile recently achieved 100 million downloads In a new development, the popular PlayerUnknown’s Battleground (PUBG) mobile game has managed to achieve three million players in the United States. According to the latest data from analytics platform App Ape, the PUBG Mobile game has crossed ... END_OF_DOCUMENT_TOKEN_TO_BE_REPLACED

HIGHLIGHTS Twitter earned $61 million in the first three months of the year Company was helped by strong growth in advertising revenue First quarter revenues rose 21 percent from a year ago to $665 million Twitter reported its second consecutive quarterly profit Wednesday, boosting the outlook for the messaging platform after years in the red. The San Francisco-based social network earned ... END_OF_DOCUMENT_TOKEN_TO_BE_REPLACED

In a little less than a week, third-person battle royale shooter Fortnite has skyrocketed to the top of the charts on the App Store in more than 40 countries. This is no mean feat considering that the game is invite only at the moment. What’s more is, it’s managed to earn over $1.5 million (around Rs. 9.7 crore) worldwide in its first four days. In ... END_OF_DOCUMENT_TOKEN_TO_BE_REPLACED

Ola’s rivalry with Uber has just entered a whole new dimension. Seven months after Uber launched its on-demand food delivery app UberEATs in India, Ola on Tuesday announced that it will acquire Foodpanda’s India business. In the bargain, the food delivery business in the country is likely to get a big boost, much to the delight of couch potato foodies. ... END_OF_DOCUMENT_TOKEN_TO_BE_REPLACED