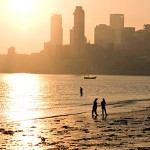 London: Mumbai and Bangalore are among the cheapest cities in the world, according to a top London-based forecast group that named Singapore as the most expensive city. Economist Intelligence Unit (EIU) ranked Singapore as the priciest ahead of Zurich, Hong Kong, Geneva and Paris. It also said India and Pakistan accounted for five of the ten least expensive cities in ... END_OF_DOCUMENT_TOKEN_TO_BE_REPLACED