Facebook, which acquired Instagram for $1bn in 2012, has not provided an official reason for the outage. Photograph: Tom Dymond/Rex Features Facebook and Instagram were offline to many users on Wednesday afternoon in what appeared to be a global connection problem. The website Down Detector suggested users of both social media sites began reporting problems at about 4pm, with Europe and North America seemingly ... END_OF_DOCUMENT_TOKEN_TO_BE_REPLACED 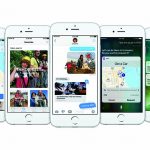 Apple released the iOS 10 update for compatible iPhone, iPad, and iPod touch devices on Tuesday, and some early adopters reported that their devices were ‘bricked’ while installing the update. The issue was reported by more than a handful of users in the first hour of availability of iOS 10. Apple confirmed the problem and stated that affected users should ... END_OF_DOCUMENT_TOKEN_TO_BE_REPLACED