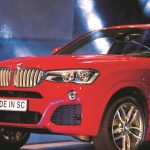 German carmaker BMW invested $8 billion in a 1.2-mn sq ft assembly plant in the US. (Photo: Reuters) Years before Donald Trump began promising to bring back good manufacturing jobs by getting tough with US trade partners, such jobs have already been on the rise, largely thanks to foreign companies now cast as villains in Trump’s narrative. Reuters analysis of federal jobs data shows ... END_OF_DOCUMENT_TOKEN_TO_BE_REPLACED

March 6, 2016 Comments Off on HMT Shares Soar 20% on Revival Plan Of Subsidiary

Shares of HMT rose sharply by 20 per cent on Friday as the government is eyeing revival of HMT Machine Tools. The stock advanced by 18.61 per cent to Rs. 49.70 on BSE. On NSE, shares of the company jumped 19.92 per cent to Rs. 49.95. “Having closed down three of its subsidiaries, we are now looking to revive HMT ... END_OF_DOCUMENT_TOKEN_TO_BE_REPLACED