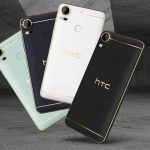 Taiwan’s HTC on Tuesday announced worse than expected fourth-quarter results and analysts said its much-hyped virtual reality products had failed significantly to boost the struggling smartphone maker. Revenue from October to December was down 13.62 percent year-on-year to TWD 22.2 billion ($720 million or roughly Rs. 4,820 crores). The net loss was TWD 3.1 billion, an improvement on the year-before ... END_OF_DOCUMENT_TOKEN_TO_BE_REPLACED