March 11, 2016 Comments Off on Apple Lawyer Says US DoJ Attempting to ‘Smear’ Company 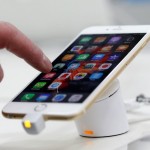 Apple accused the US Justice Department on Thursday of trying to “smear” the company by trafficking in “desperate” and “unsubstantiated” claims in its ongoing quest to force the company to help unlock an encrypted iPhone linked to one of the San Bernardino, California shooters. “The tone of the brief reads like an indictment,” Apple General Counsel Bruce Sewell told reporters ... END_OF_DOCUMENT_TOKEN_TO_BE_REPLACED