March 14, 2016 Comments Off on Telegram Update Boosts Size of Supergroups to 5,000 Members 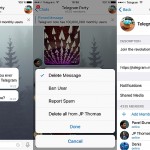 Telegram last month hit 100 million monthly active users and alongside announced a bunch of updates for the app as well. The instant messaging service has now announced another update, focusing on the Supergroups feature. As a part of Telegram v3.7 on Android and iOS, the company has now increased the number of people who can join a Supergroup from ... END_OF_DOCUMENT_TOKEN_TO_BE_REPLACED